A new post to tell you about my recent stay in the Italian Riviera Inland and to share with you the recipe of the amazing Torta Baciocca, the potato savory pie traditional of these places.

The summer sun, here in Valle Sturla (East Ligurian inland, behind Chiavari), sets by launching beams of light that lash the mountains. The shades of green in the woods in the morning are as many as the leaves that make them up, whilst the valley rises, sinuous and placid, like a soft woman laying.

The combinations of bouquets of wildflowers are endless and to be lucky you can also find same meet the Saint Jhon’s lilies on the roadsides ,which however you cannot pick up ‘cause they are rare.

It seems that among these woods days are still marked by the rhythm of the sun. At sunset, along the road at the bottom of the valley, you can encounter families chatting al fresco on the front door, children learing to ride a bicycle on the main road (so no cars ever pass) and grandmothers shelling beans or corn on a cloth laid on their legs.

Life here has a slow rhythm, which to tell the truth remembers me – with a vague nostalgia – the best of the lock-down days: a part of me felt less confused and more protected, here, during this confused “phase 3”.

This was also the ideal place to put into practice part of what during the long quarantine I understood I was carving for.

I moved on foot as far as possible, even without needing to go somewhere, but only for the pleasure of walking on a lawn or in the shade of the woods.

I looked at the clock as little as possible, sometimes I even forgot it on the bedside table. Instead of television, in the evening, the starry sky above and the fireflies below accompanied me to sleep.

We ate fresh vegetables – Kilometer 0 and Chemistry 0 – because Francesco, who lives in the house at the bottom of the lawn, has a  family vegetable garden so fruitful that we too benefited from the surplus: he arrived once a week, with a box overflowing of colors held in his hands and a straight smile printed on his face.

I started talking with the people I met on the street and so I met Marcello and Roberta who live next to the village church and in their garden instead of flowers and deck chairs they have a barn, 2 tractors, 5 cows, a henhouse, fruit trees and a luxuriant vegetable garden. They lovingly cultivate a patch of land of basil, courgettes, onions and potatoes and they both got embarrassed by looking away every time I asked how much I owed for the vegetables I took away and that they were not used to sell.

Tiziana instead lives a little higher, she raises goats and makes cheese: seasoned caciotta, less seasoned caciotta and fresh ricotta. That’s it. I discovered her by walking the steep “path of the resistance” that started right behind my house. Tiziana also had a magnificent small field of ancient wheat that she luckily milled (btw in the ancient water mill of the Aveto Valley, Mulino di Gramizza) just while I was there, so I could also cook with freshly ground flour of native wheat. I’ve never seen a flour like that: sweet, fragrant, full-bodied, amazing!

In this slow passage of time, cooking become even more a spontaneous and instinctive act to me, my way, together with photography and words, to celebrate and share all this beauty.

During the month I spent between Valle Sturla and Val d’Aveto there was not a day in which I did not taste a local product, visited a small business, cooked a local recipe, interviewed local people about the food of this beautiful land. My thirst for stories, dishes, cuisine has always been satisfied.

Mushrooms, potatoes, hazelnuts, chestnuts, cheeses, polenta, onions, berries. There are so many products that speak of this Ligurian inland that the topic deserves a full post, I will do it as soon as possible.

For now I want to focus on potatoes. Here in Valle Sturla people grows potatoes, lots of potatoes. Each garden has a potato field, large or small, however rich. Each farmer offers you his freshly picked ones. It is an ancient tradition, dating back even a few years after potatoes were introduced into Europe from America.

The most famous historical variety is the Quarantina potato, a Ligurian pride rediscovered only recently in the 1990s. Although it is a product of excellence, it is rarely grown because it keeps shorter than other qualities and therefore is less convenient.

Mountain potatoes, together with chestnuts and polenta, were the most used ingredient in traditional peasant cooking, a poor cuisine combined with the need to make do.

And in fact there are many local recipes that see potato as the main ingredient. Among the most famous there is the Potato Cake (which also takes different names depending on the area), that are mashed potatoes, fried onion and parmesan – a lot – combined together and baked in the oven under a crust of breadcrumbs. I prepared it with a recipe found on the internet, I liked it so much that as soon as I have time to develop a precise recipe (what I found was mostly a count), I will share it with you!

Then there is the Prebuggiun, which in Genoa and on the Ligurian coast consists of a bouquet of different wild herbs (see my post on Prebuggiun) while in Valle Sturla and Val d’Aveto means mashed potatoes mixed with steamed green leaves vegetables (chard, spinach, nettle, borage, escarole) all seasoned with lots of Parmesan cheese, to serve as a side dish. And finally there is the ubiquitous, incomparable Torta Baciocca I would say THE savory pie symbol of the  local cuisine.

Like any symbol, Baciocca pie carries a legend. Tradition says that Torta Baciocca has crossed the mountains and the regional borders, migrating from Emilia thanks to the initiative of some young Ligurian mountaineer who were looking for a wife among the Emilian girls of Santa Maria, renowned for their beauty and cooking skills.

It is said indeed  that in Santa Maria del Taro, beyond the borders, more girls than boys lived and that “baciocche” were called the most beautiful girls and best at making this cake. As soon as the news spread in Valle Sturla the boys organized a real kidnapping of the girls (though it is likely that the young women moved after having entered into regular marriage).

Therefore the “baciocche” brought to Valle Sturla, in addition to their great beauty, also the knowledge and flavors linked to the recipes of their country of origin, including that of the famous potato and onion pie that quickly spread throughout the area.

Even the traditional cooking of this cake is worth telling. Once upon a time, in fact, it was cooked under heavy cast iron bells red-hot in wood-fired ovens, laid on red-hot cast iron plates (called locally “testi”) and wrapped in wet chestnut leaves, leaves that women collected in the summer and left to dry, specifically to give a slightly tannic taste to the dish.

There are as many traditional recipes as there are grandmothers who cook, but all share some basic ingredients: a puff pastry in which to wrap the filling (sometimes covering it, sometimes not), potatoes (sometimes already cooked, more often raw, cut into very thin slices), browned onion and lots of Parmesan. There are recipes that involve the use of eggs, others of milk and flour, some strengthen the dish with a slice of diced bacon, others enrich it with a handful of dried mushrooms or rosemary or parsley.

The recipe I fell in love with has no eggs and potatoes are raw. I like it because it differs from traditional Ligurian savory pies always bearing eggs.

When using raw potatoes it is important to cut them into very thin slices as well as to “pre-treat” them with salt so that they give away their internal vegetation water. They can be sprinkled with salt, left to rest for half an hour and then rinsed and dried, or, as I do, soaked in salted water for the same time, and then rinsed and dried anyway. In this case the potatoes will also release their starch. It will be the liquid contained in the batter (in our case the milk) to rehydrate the filling and with this liquid the potatoes will cook, resulting once cooked dry and not boiled.

Here is the recipe, enjoy!

For the potato filling

If you, like me, have a thing for savory pie, you can have fun trying also my rice pie, my pumpkin pie, my chard pie or my artichocke pie. Savory pies are a must of the Italian Riviera cuisine!!

Did you know that there are wild horses in the Natural park of Val d’Aveto k? The house I rented in July was on the edge of the natural park and a small pack was settled right in the woods and meadows around the house! To find out more, visit the site I cavalli selvaggi dell’Aveto. 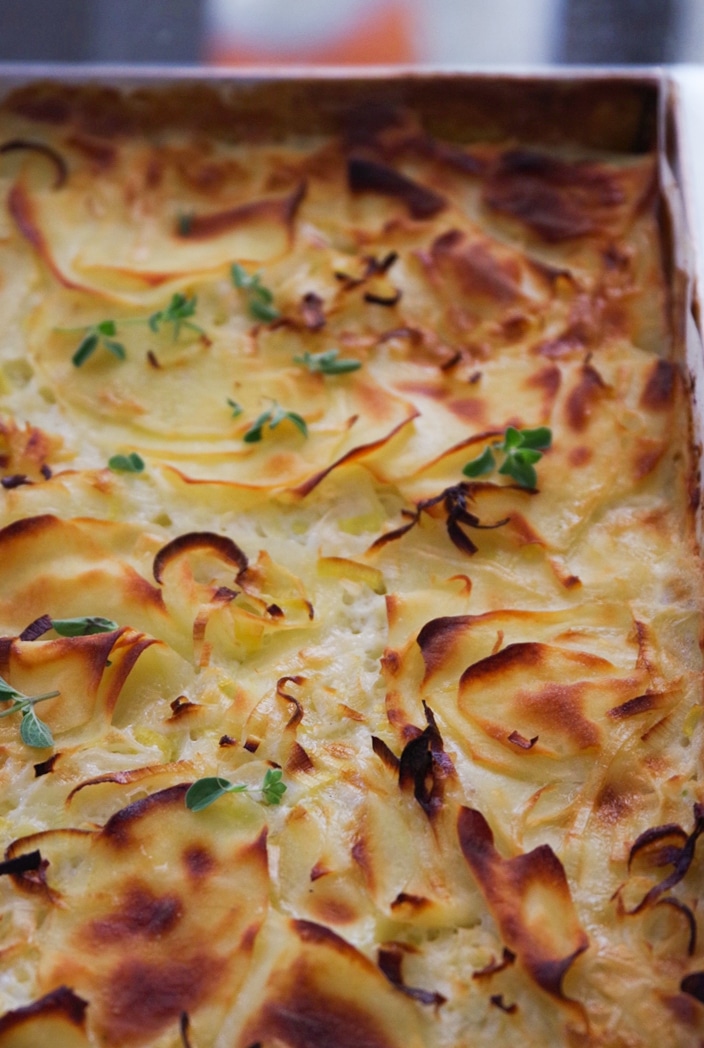 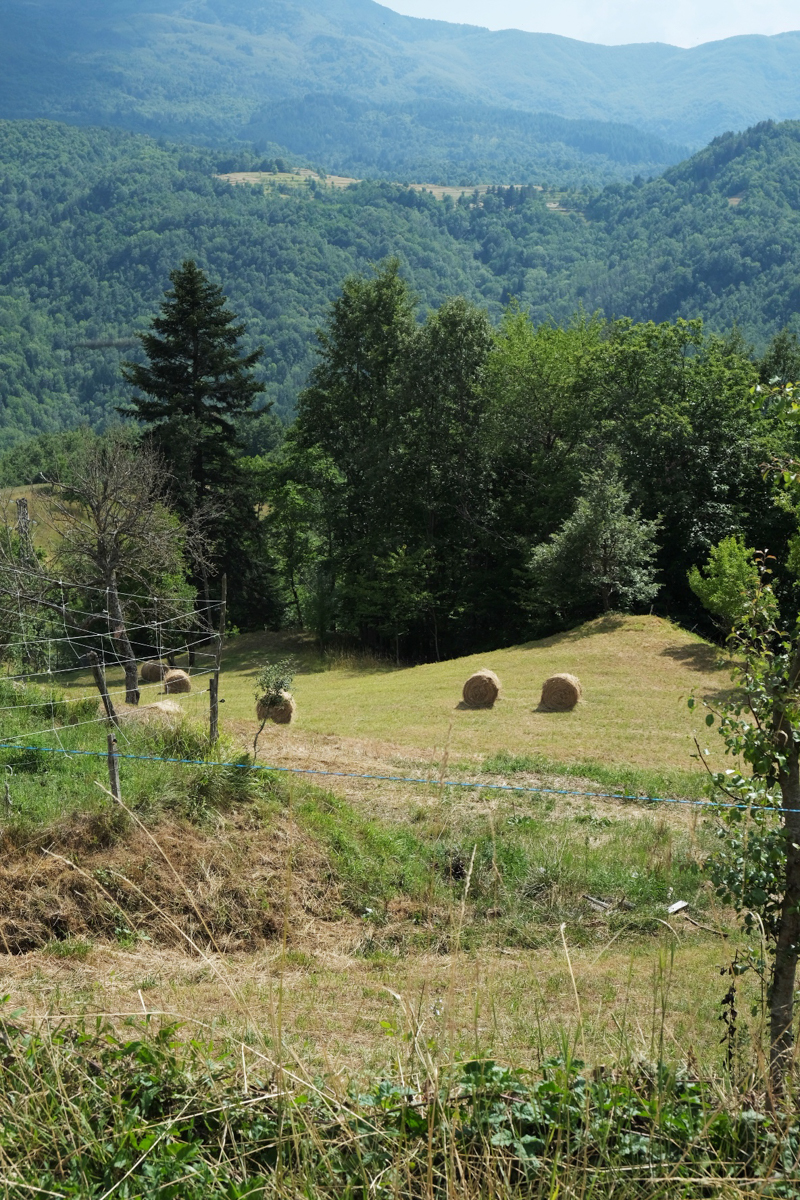 My grandmother came from Lorsica, my grandfather from Favale de Malvaro. They met at Ellis Island. She made a Polenta with Quail Sauce that was very delicious. Do you have some Polenta recipes that are Ligurian favorites you can share? All of your recipes I have tried have been wonderful. Thanks!

Is there a preferred type of potato to use in the USA. We live near Cleveland, Ohio.
Is an Idaho white potato okay to use?

Idaho potatoes are very starchy. I would suggest an all purpose potato such as Yukon Gold or some with very low stach such as New Potato.

Hello Alan,
I will share polenta recipes in the upcoming Fall…I’m a bit late, sorry!

[…] when I was there I always had a packed lunch, with things pruned from home or with a few slices of Torta baciocca and focaccia bought in the grocery store of […]