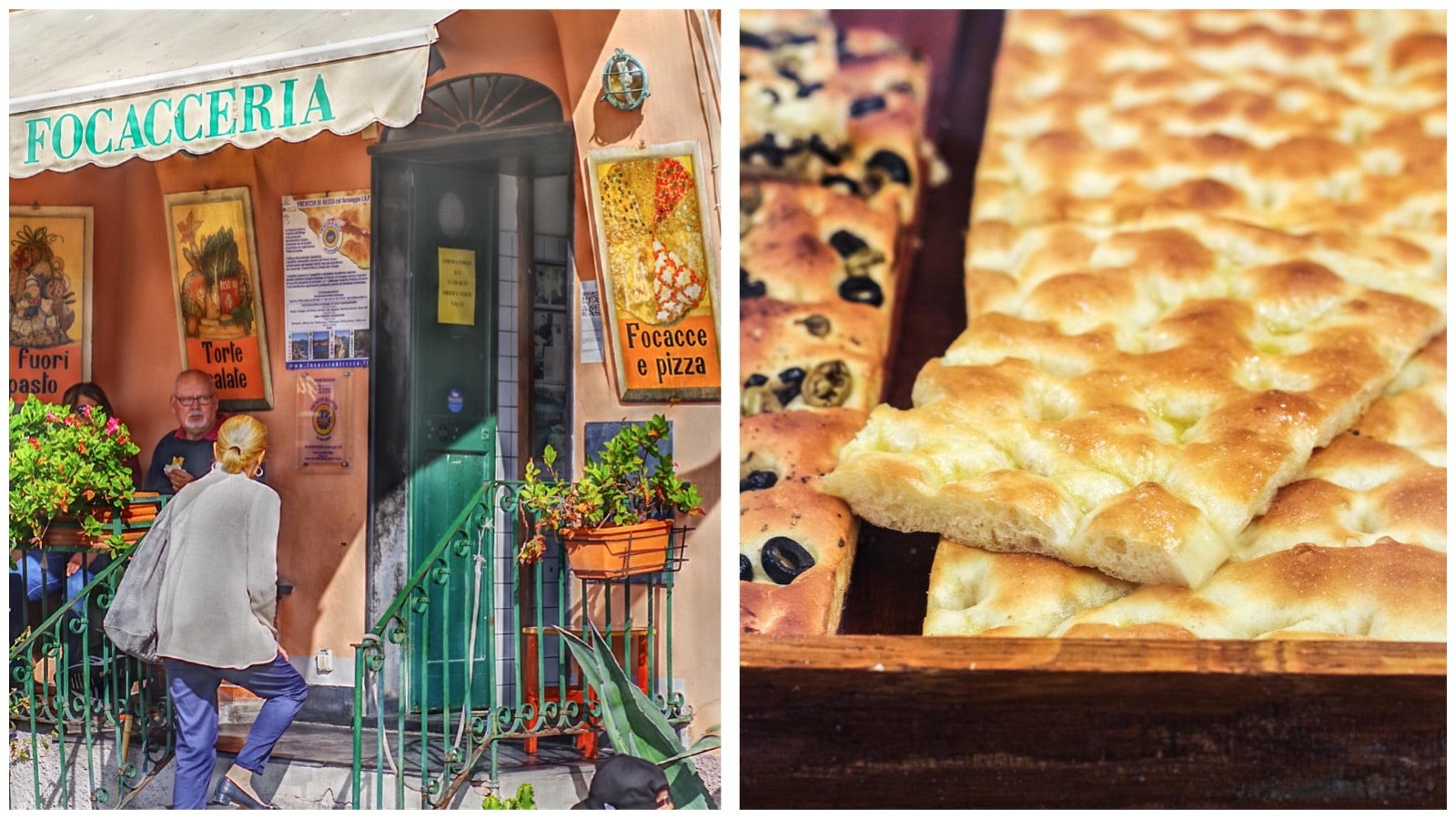 Focaccia in Genoa is ubiquitous. It is in our life from sunrise to sunset. We soak it in the cappuccino for breakfast (yes, we do, and it’s incredibly good), we give it to our children as a snack at school, at lunch goes hand in hand with bread in the basket, it is offered at parties and finally with a glass of white wine for aperitivo.

In the Middle Ages it was the convivial bread par excellence. It was eaten in church during marriages and then also during funerals (which in the long run annoyed the clergy that ended up forbidding its consumption in church).

In Genoa, focaccia sells like hot-cakes. Everybody buy at least a slice of focaccia together with their daily bread. The bakeries bake it from the very first hours of the morning and continue nonstop until mid-afternoon. Because Genoese focaccia gives its best freshly baked – ephemeral, like all good things, it does not remain fragrant more than one day – and Genoeses know this so they can wait silently in the store even 10 minutes to put their hands on a piece of focaccia sizzling with oil. Then normally less than a half will arrive at home because the rest will be devoured – more or less consciously – along the way, thanks to the fact that the bag, if the focaccia is hot, must remain open otherwise it soften, and you can imagine the scent that goes up straight to the nostrils…

Since every bakery, pizza shop, bar or sciamadda(typical Genoese gastronomy) in Genoa sells Genoese focaccia, how to recognize a good one? If you buy it in a bakery, in the early in the morning and still hot you are already on track.  But you can recognize perfect focaccia because it is thin (maximum 2 cm thick), it is studded with holes (called “œggi”, eyes) with a white and creamy center (the cream is formed by flour, water, salt and oil that are poured on the surface just before the oven), it is golden and bright with oil (focaccia must almost leak oil), it is crispy outside and soft inside, salted on the surface and never sour (which happens if it is kneaded with poor olive oil).

Then there are variations on the theme, such as focaccia with onions (attention it creates dependence… and keeps people away), the one with sage or with rosemary and the one with olives. Then each bakery indulges on topping as they please, so there are focaccia with cherry tomatoes, others with various vegetables and so on.

The focaccia di Recco, instead, is a different product: it’s a savory pie typical of Recco (a small village on the coast close to Genoa) made of two very thin layers of unleavened dough containing a local fresh cheese melted. 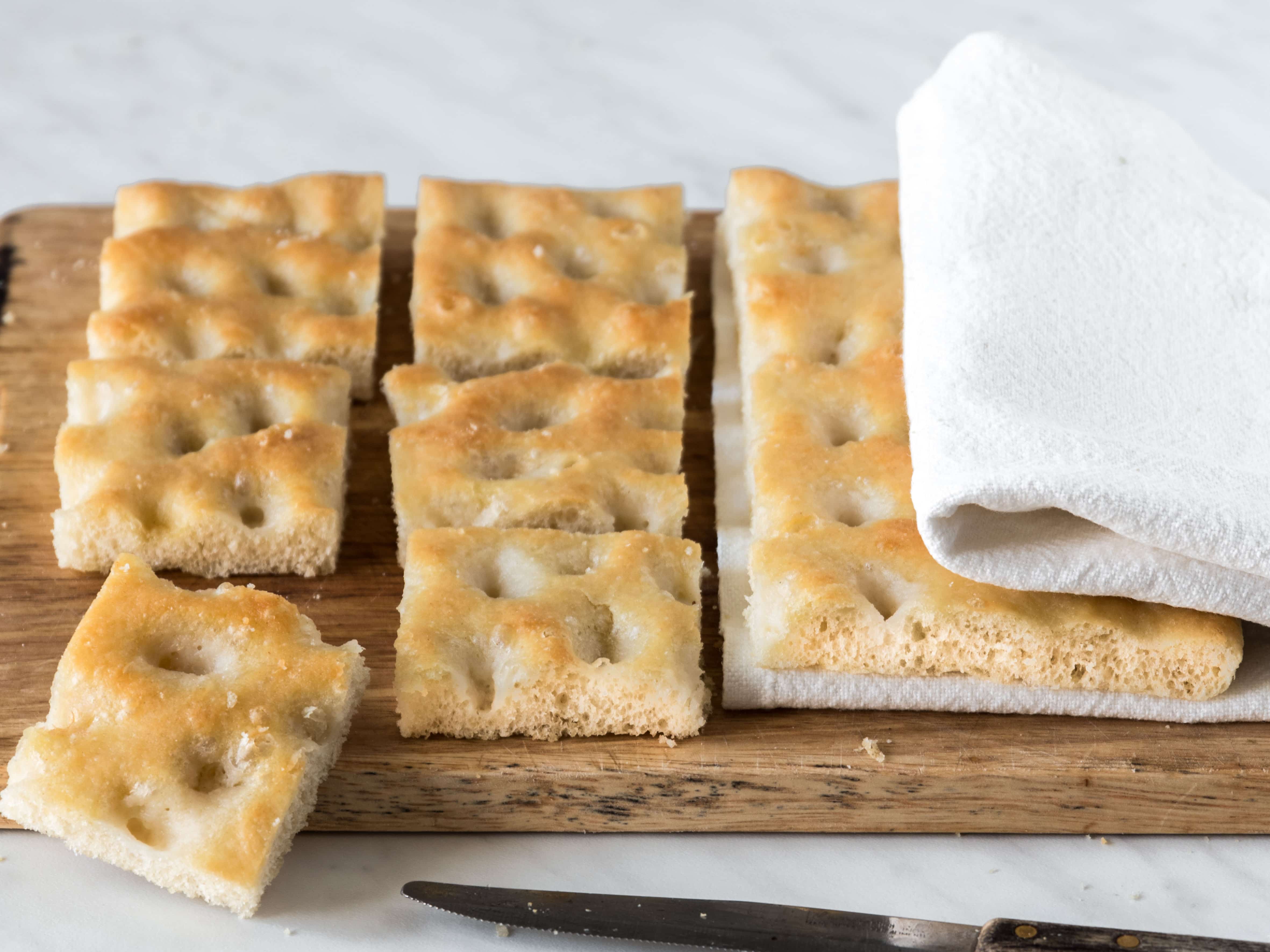 The recipe of Genoese focaccia

If you have the right recipe, you can make a good Genoese focaccia  also at home. It is important to follow the procedure step by step, to respect the various stages of leavening and to use an appropriate pan according to the amount of dough to bake. In the recipe below the ingredients are calculated to obtain a dough to be rolled into a rectangular aluminum pan with low sides measuring 30×40 cm.

But first some practical tips: 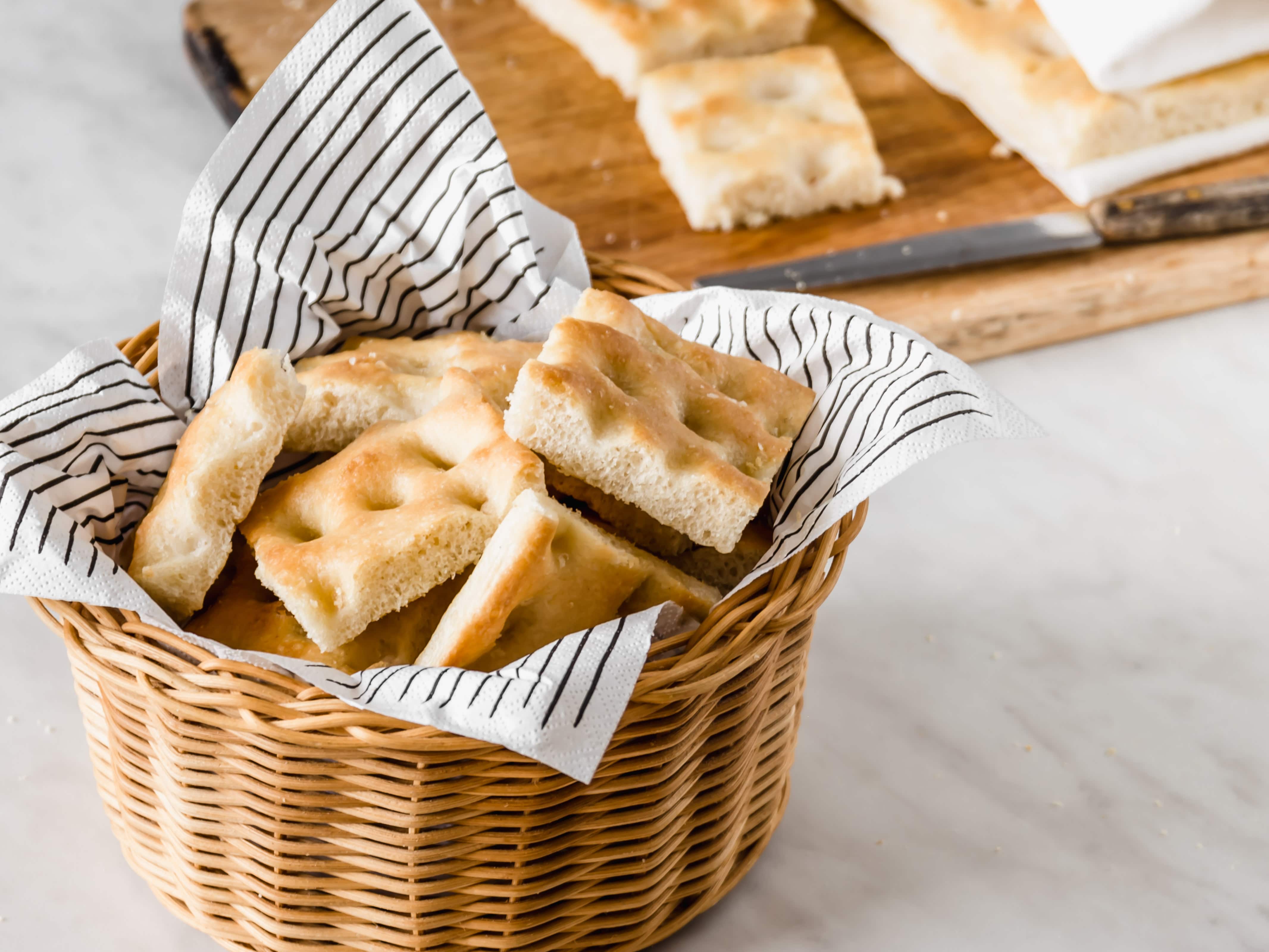 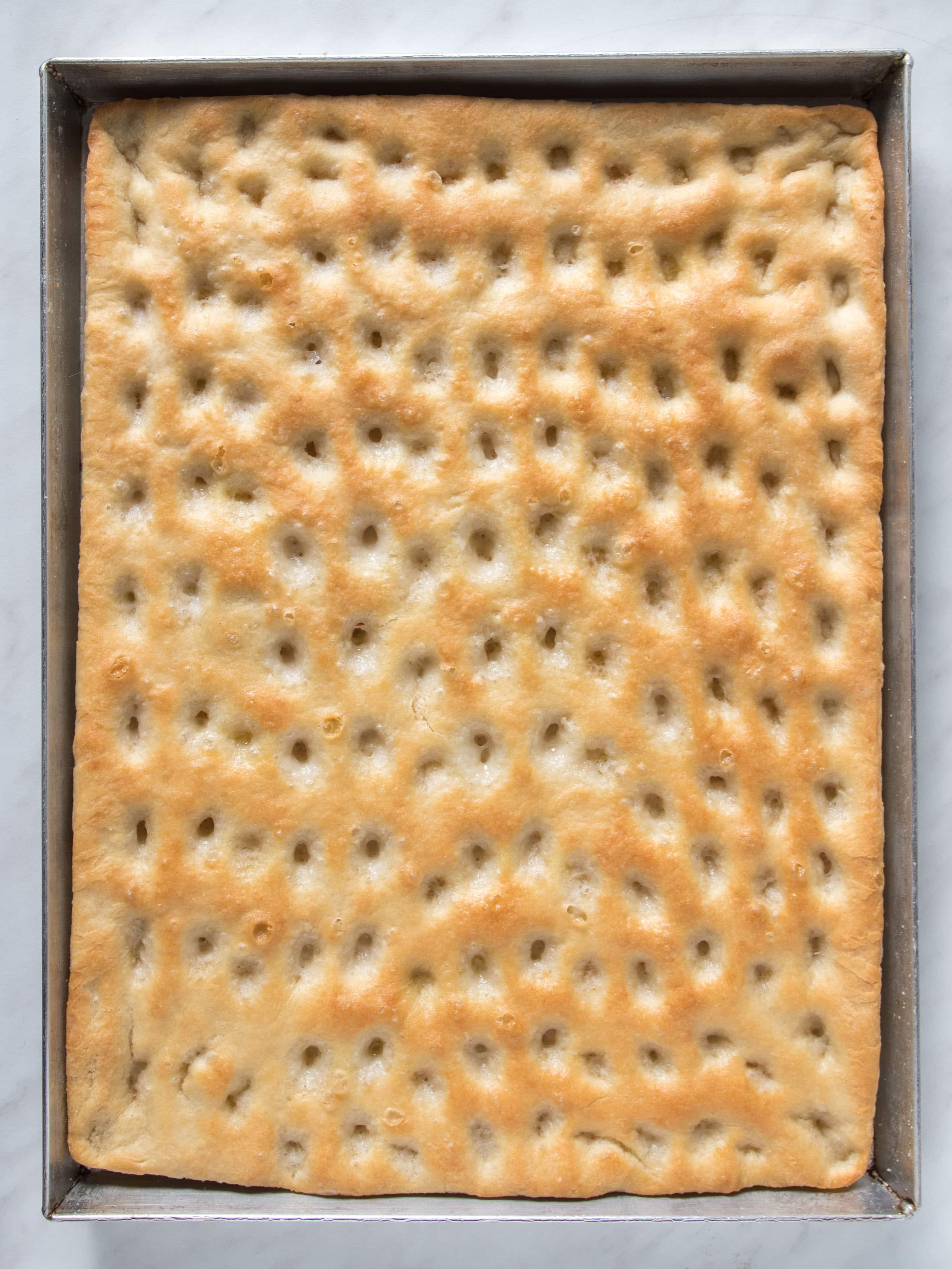 Where to eat the best focaccia in Genoa?

Here are some bakeries in the center of Genoa whose Genoese focaccia – on my humble opinion – is worth trying. Then the last word is up to your taste!

In the historic center area:

On the way to  Principe train station

Happy focaccia to everyone!

Did you like this recipe? Don’t miss the next ones!

Hello, I am in the USA. What is malt?
Grazie!

Hello! Malt is germinated cereal grains that have been dried in a process known as “malting”. The syrup is used in bakery in lieu of sugar/honey to improve the bread raising.Happy baking!!

I made this tonight, and lacking malt used an equal amount of sugar. It was the best focaccia I’ve ever made! Thank you so much for the recipe, I will make it again. My husband loved it too!

Thank you Susan for trying my focaccia! I’m very happy it was a success. You did well, in lack on malt sugar is a perfect substitute. All best!

[…] in the kitchen, opened with the Liguria extra virgin olive oil (yeeee!). Then Samin cooked our focaccia and our superb pesto, considered as a perfect example of how three different types of fat (oil, […]

Thank you for this recipe, it’s perfect! I pureed green olives and added them to the salt brine, and also added rosemary to the dough. It was sooooo delicious! Looking forward to more experiments with this amazing recipe. 🙂

Hello Adria, thank you for cooking my focaccia! Your variations too looks amazing!

Mmmm, this focaccia is so good! Crispy on the outside, almost creamy on the inside, perfectly salty…I am going to have to make it again soon! Thank you for this recipe and for sharing delightful insights to Genoese culture and cooking.

Thank you Kathleen, happy you tried my recipe and liked it!

My best food shops and deli in Genoa - asmallkitcheningenoa

[…] indeed can be historically considered the cuddle of street food): bakeries where to taste focaccia, sciamadde where to taste savory pies, focaccia al formaggio (cheese pie) […]

Hello Renata! Thank you for trying my recipe!! Yes, fresh yeast is what the recipe provides for . Let me know the outcome!

Hello – what flour do you use for this recipe? Thanks!

Hello!Thank you for reading and commenting!!
I use a 00 flour, a refined flour with a high quantity of gluten inside.
Happy baking!

[…] We arrived in Via Garibaldi, I took them inside the courtyard of Palazzo Lomellino (it was out of their program, but I insisted) and then we “went down” from Macelli di Soziglia to taste a bit of Genoese caruggi (the narrow alleys of our historic center) and a slice of freshly baked focaccia.  […]

[…] If you want to order focaccia like a local ask for “una fetta di focaccia”. If after tasting focaccia you fancy trying to bake it at home, here you find my genoese focaccia recipe. […]

[…] I started with the “quick” recipe, the one you prepare straightforward in about four hours with the so-called “direct method”. You can find it in my post “Genoese Focaccia, the perfect recipe” […]

I’ve tried countless focaccia recipes and this is the definitely the best, and closest to what I had in Genova!

My husband is Genovese and the one thing he misses the most about Genova is focaccia. We could never find anything close to Genovese focaccia here in San Francisco. He was happy like a little boy when this focaccia came out of the oven. We finished the entire sheet pan of focaccia in the 10 mins

I will also try the indirect method next week and am excited to see if that recipe is even better.

Thank you!!! You made my day. You husband test is very important to me 🙂 . You will see that the indirect method makes the focaccia even better!

Hey, your recipe looks amazing. I had traveled to Genoa a year ago and have been trying to make some decent focaccia at home. When you say brewers yeast, do you mean active yeast used to brew beer, or the inactive supplement. And is the malt the liquid form or dry? Thanks for your time!

Hello Ryan brewrs yeast if Active dry yeast. Malt is liquid, its kinda corn syrup, but you can use tasteless clear honey as substitute! Thank you for trying our my recipe!!

Can you make a focaccia with onion?

What happend if you don’t dust it with flour when it is in the pan, what is the meaning?:)
And, if I want to make 2 pans of focaccia, do i doble everything?

And, can I let it rise it the oven on low heat?

Hi! I was born in Camaiore but live in Los Angeles and this bread looks exactly like the focaccia I ate as a child and only dream about as an adult! We called it schieciata. I can’t wait to make it.. I’ve never made it with malt – is it a syrup or malt powder?

i just tried your recipe and it has turned out pretty well – but I am a little confused on the measurements. How much is 180 g of lukewarm water – liquid is measured in ml (or cups if you are American!). Otherwise i love your website – missing Italy so much this year.

“Lievito di birra” translated as brewer’s yeast in this recipe is fresh yeast, also known as compressed or cake yeast. It’s the kind sold in tiny cakes in the refrigerated section of many supermarkets. The quantity needs to be adjusted if using active dry yeast in the USA. To convert from fresh yeast to active dry yeast, multiply the fresh quantity by 0.4. (Therefore, 9 gr x .4 = 3.6 gr of active dry yeast). Has anyone tried to use active dry yeast? If so, how much did you use? I am trying with 3.6. I’ll let you know if it works!

Dear Giovanna, thank you so much for this clarification! Very very helpful!!

Hello! It’s wheat malt . Both in syrup and in powder. If you cannot find it, you can substitute with honey!

Hello!
dusting with flour when in the pan will create a white cream in the holes whilst cooking. If you want to do two pans (39×49 cm) you have to double the doses.
Finally, let it raise at room temperature in a warm place of your kitchen, around 20-22 degrees will be fine!
Thank you for reading the blog and sorry for the utterly late reply!

Sure!! Cut white 1 big white onion very finely longwise , sprinkle with salt and let it rest for 30 minutes. Add on top the focaccia just before baking.

It was perfect with 3.6 gr of active dry yeast. Grazie!!

A Twitter pile-on and a recipe for Ligurian focaccia

[…] is Samin’s recipe. I also found another interesting post on this type of Genovese focaccia with another recipe which I’ve yet to […]

My Italian Riviera apéritif and the recipe for fried sage. - asmallkitcheningenoa 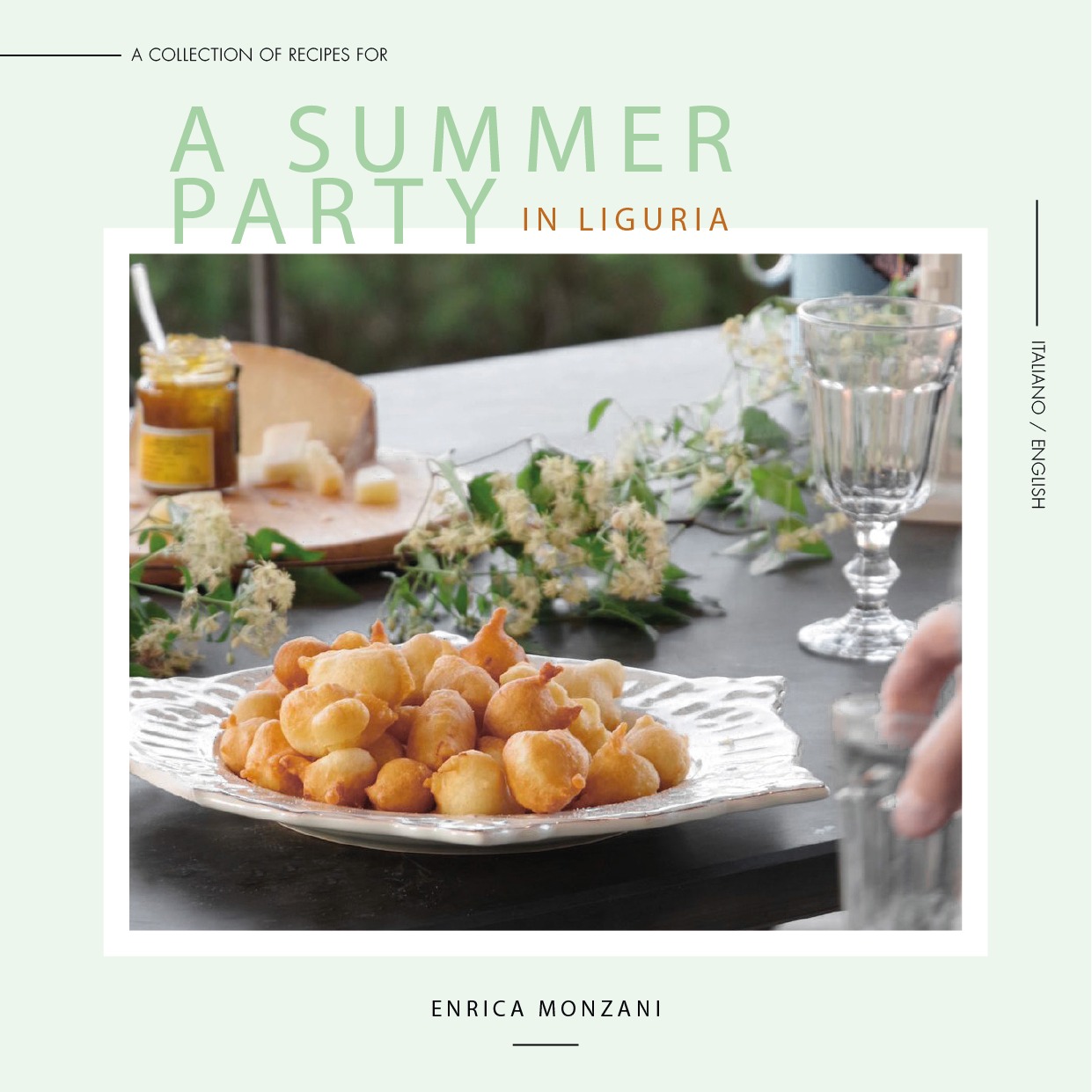