I have always had a conflictual relationship with farinata, the famous Genoa chickpea tart. Sincere and dispassionate love when bought  already made, deep hate mixed with discomfort when I prepared it at home. Yes, I’ve neve been able to properly bake a farinata. Too high, too thin, burnt on top, raw at the  base, and vice versa, or “decomposed” into a thousand of greasy bubbles… and so on. A clear culinary frustration because if you read the recipe it seems the simplest thing in the world: make a batter with water and chickpea flour, let it rest, pour it over an oiled baking pan and bake in the hot oven. That’s it, easy isn’t it? So the problem had always been me. And since I already had enough frustrations I had decided that we could buy our farinata from the bakery near our house, fairy good by the way.

Making farinata has always been a thorn in my side until someone taught me how to do it. It is true that experience shows but it is also true that those who have more experience than you can show you, and you certainly gain self-esteem!

Tricks to prepare a perfect farinata

Without other preambles (I’ll tell you the story of the farinata at the end of the recipe), here are the tricks to prepare a perfect farinata like the one sold in Genoa downtown alleys:

for a 35cm diameter pan

Farinata is one of the most representative dishes of Genoese street food. It is an ancient dish so popular that the Genoese give it a legend to remember one of the greatest achievements in the city’s history: the defeat of the Pisans in the Meloria battle (Pisa too was a Maritime Republic and it was a great rival of Genoa for the dominance over Corsica and Sardinia).

The year was 1284. It is said that on the return from the battle the Genoese fleet encountered a storm. The bags of chickpea flour on board the ships overturned and the flour mixed with the sea water that swept the decks. After the storm the sailors, exhausted and hungry, recovered the batter and put it to dry in the sun. The next day they tasted it and discovered its goodness. When they got home, they refined the recipe baking it in wood ovens and, in defiance of the won enemy, they called it “the gold of Pisa”.

A legend, certainly, because farinata dates back to Roman times and similar dishes – based on water and chickpea flour – are also typical of other Mediterranean regions: in Tuscany, in Pisa – in fact – you can eat cecina, in Livorno a cake of chickpeas, in Sardinia the fainé, in Sicily there are the famous panelleand in Provence a tart very similar to farinata and called socca. In short, the chickpea flour over the centuries has fed and conquered so many seafaring peoples!

Where to buy farinata in Genoa

If you are passing through Genoa, here are some places where I recommend to buy it: 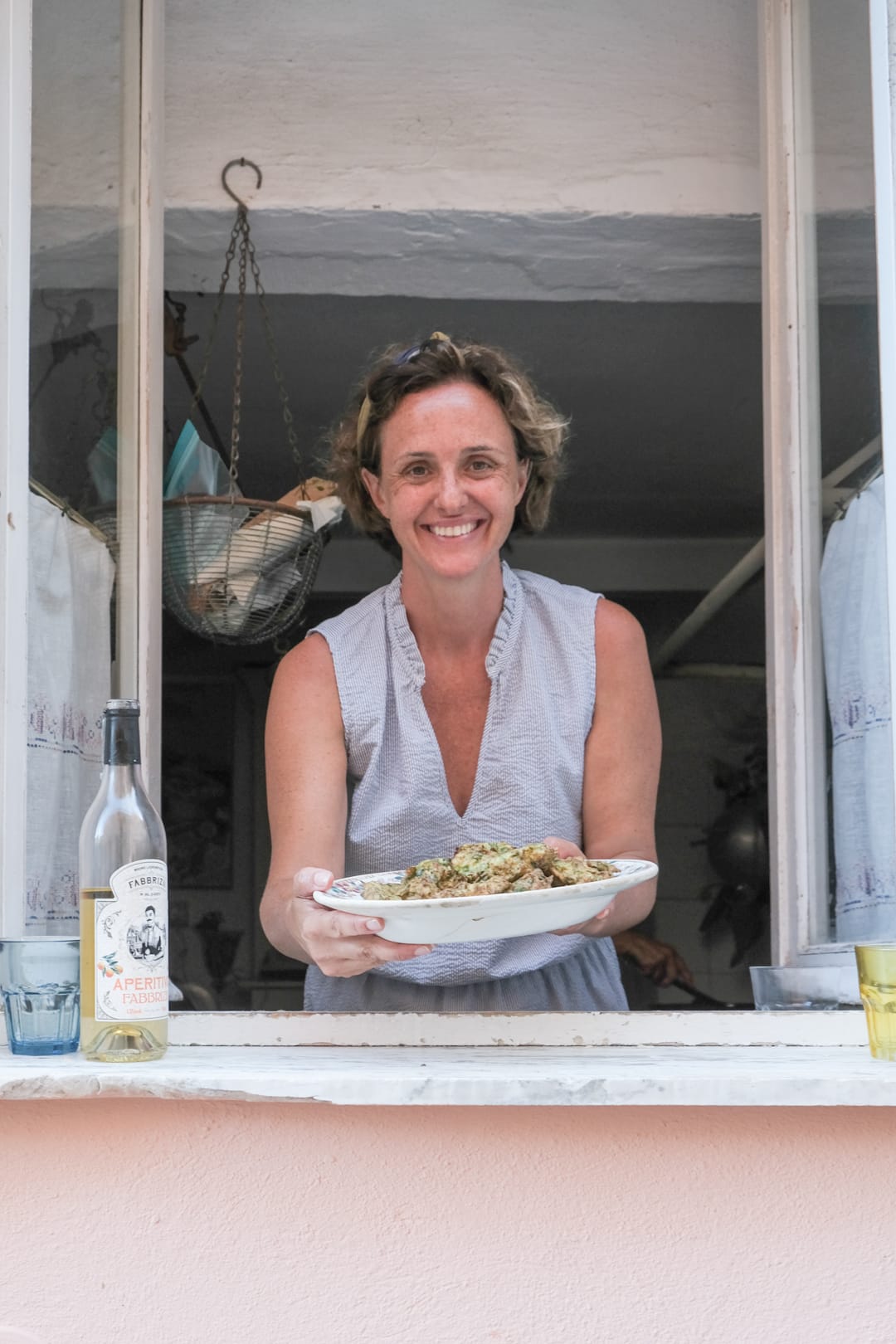 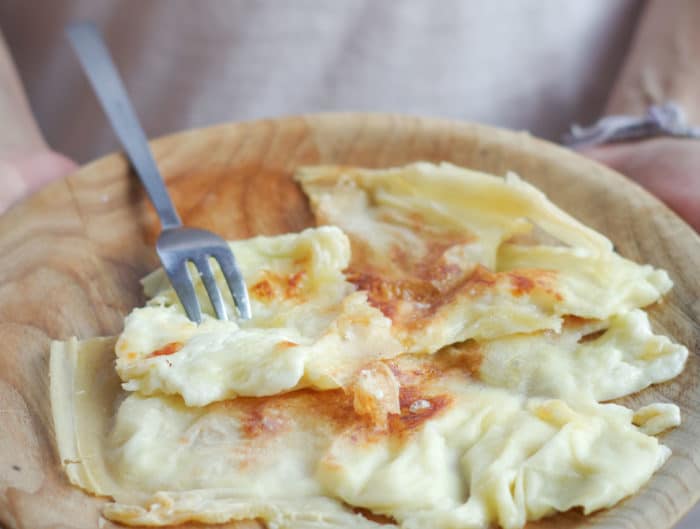 Thank you for explaining how to make the farinata. Maybe this time I will get it right.

My word, this is amazing. I tried the first time with a rectangular roasting pan, guestimating the quantities and it was just OK. Then I bought a round pizza pan, resistant to 240 degrees and followed the recipe to the letter. This time, it was amazing, and took us straight back to eating it in Genoa. Than you so much!!!

Hello! Oh, thank you! I’m so happy to hear that!

This is the very best recipe I have found on-line. I use a cast iron skillet with excellent results. Thank You !!!

Excellent recipe! And like you, when making “farinata” previously, I’ve always asked “what am I doing wrong? 10/10 and simple to make, following these instructions. Thanks

[…] Antica Sciamadda San Giorgio where Alberto, the owner, was waiting for showing us how to prepare farinata (the Genoese chickpea tart) in the wood oven. I regret that this part of the shooting has been cut, […]

Enrica,
Thank you for sharing the technique of pouring the farinata down a spoon held at a 45 degree angle. I haven’t tried that technique but it makes so much sense. I make farinata frequently using different sized copper “testas” that I bought in Genova and Rapallo. Each time I use them I think of our travels around the Liguria. You have beautiful blog! —- Linda

Is the spoon touching the pan when pouring the batter? Is it parallel to the pan, at an angle, or perpendicular? For the first time, I would watch a video showing this technique!

Question what kind of sal do you use— kosher or sea salt? Can’t wait to make this tonight. Hope to hear back shortly

I came to Genoa to learn pasta in more detail and whilst there, the family I stayed with took me to a local place where I tried Farinata. I fell in love with it! So good.
I’ve tried before but the recipes didn’t work and last night I tried yours and… Perfect! Thank you.
I hope you are all well during these challenging times and when everything is back to normal I look forward to coming back for a visit!

I am SO glad that I discovered your website and this recipe. I have tried others, but this one is just perfect. Thank you for sharing it and we hope to be back in Genoa soon.

Baking Inspiration: Bread Recipes and Types From Around the World - recipes-online

[…] you can also try grinding them in a blender and sifting out the fine flour. I like eating farinata straight out of the oven and unadorned, but it also pairs well with caramelized onions or any kind […]

A World Beyond Sourdough | ViaWorldNews.com

[…] you can also try grinding them in a blender and sifting out the fine flour. I like eating farinata straight out of the oven and unadorned, but it also pairs well with caramelized onions or any kind […]

Baking Inspiration: Bread Recipes and Types From Around the World - Wellthyday

[…] may also strive grinding them in a blender and sifting out the high quality flour. I like consuming farinata straight out of the oven and unadorned, nevertheless it additionally pairs effectively with […]

I use sea salt!

Hello! The spoon is not touching the pan should have a 45° angle. The idea is to let the farinata slip on the oil surface so that the oil incapsulate the farinata batter. Hope you will master this trick as it is very useful!

I cooked my very first farinata last night using your instructions and firstly let me say that it was good. I had to scale the quantities down a bit as I only have a 28cm pan to fit inside my small microwave combi oven and I did have a small mishap with the oil but nothing serious. The only query I have is that 1% salt seemed very salty to both me and husband. I let the batter rest for 6 hours and only added the salt just before adding the batter to the hot oil in the pan. I did mix in the salt to the batter so I’m wondering if I did anything wrong or whether, after years of health warnings, we’re just not used to salty recipes.

Dear Jano,
salt is always a matter of tastes but also a matter of salts. Some are saltier other less salty, it seems weird but there are so many different salts in the world! You made the correct proceedings, so If according to you farinata was too salty, just use some less salt!

[…] test of time through the hands of countless cooks. Such is the case for socca, alternately known as farinata depending on who you ask, and is the meal-sized enlargement of the crisply fried, well-salted bar […]

So glad to have discovered this nice little blog. I love the way you explained the recipe and the legend of its provenance. I’m looking forward to making this dish tomorrow!

My best food shops and deli in Genoa - asmallkitcheningenoa

[…] this blog post for Enrica’s most helpful advice about how to pour the batter into the hot oil gently, so it […]

Can’t wait to try this! My grandparents were from Genoa , emigrated to the US in 1900 and I still have cousins your area. Thank goodness for Facebook and the internet!
This sounds wonderful. My mother was a secretarial girl and not so much an Italian cook. So I have very few family recipes. Perhaps this will become my contribution for my children Wish me luck ! So glad I found your blog too!

Amazing post! I thought I knew the way to farinata heaven, but now I will have to tweak several steps, including how long to rest the mixture and the oven temperature. Bravo Enrica.