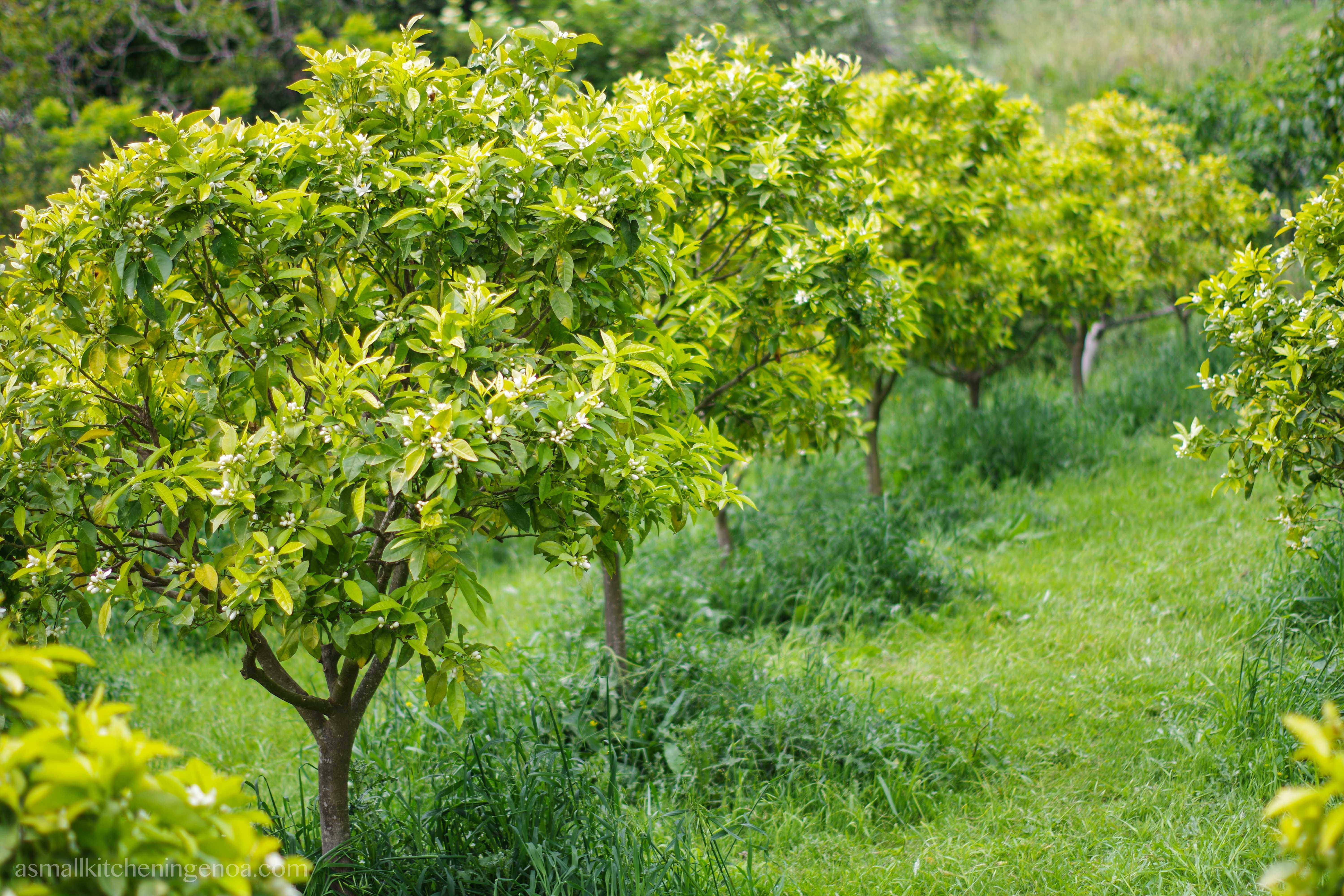 Bitter orange tree comes from far away. It started its journey from South East Asia and seed by seed it made its way through Oman, Persia and Egypt to arrive in 1000 AC on the coasts of the Arabian Mediterranean Sea (Morocco, Algeria, Tunisia and Lebanon). In the course of the crusades, then, the French and Genoese discovered the beauty of this citrus –  with golden fruits and white flowers of a sublime fragrance –  loaded it on their vessels and brought it home to garnish their gardens.

This is how bitter orange arrived in Provence and in Liguria and there decided to remain and grow prosperously. In the sixteenth century the extensive citrus groves of the Ligurian west coast were very famous throughout the Mediterranean and they were called “the Ligurian Gardens of the Hesperides”. In spring the scent of bitter orange blossoms was so intense that passing off the coast of Bordighera the sailors could even perceive it from the sea. 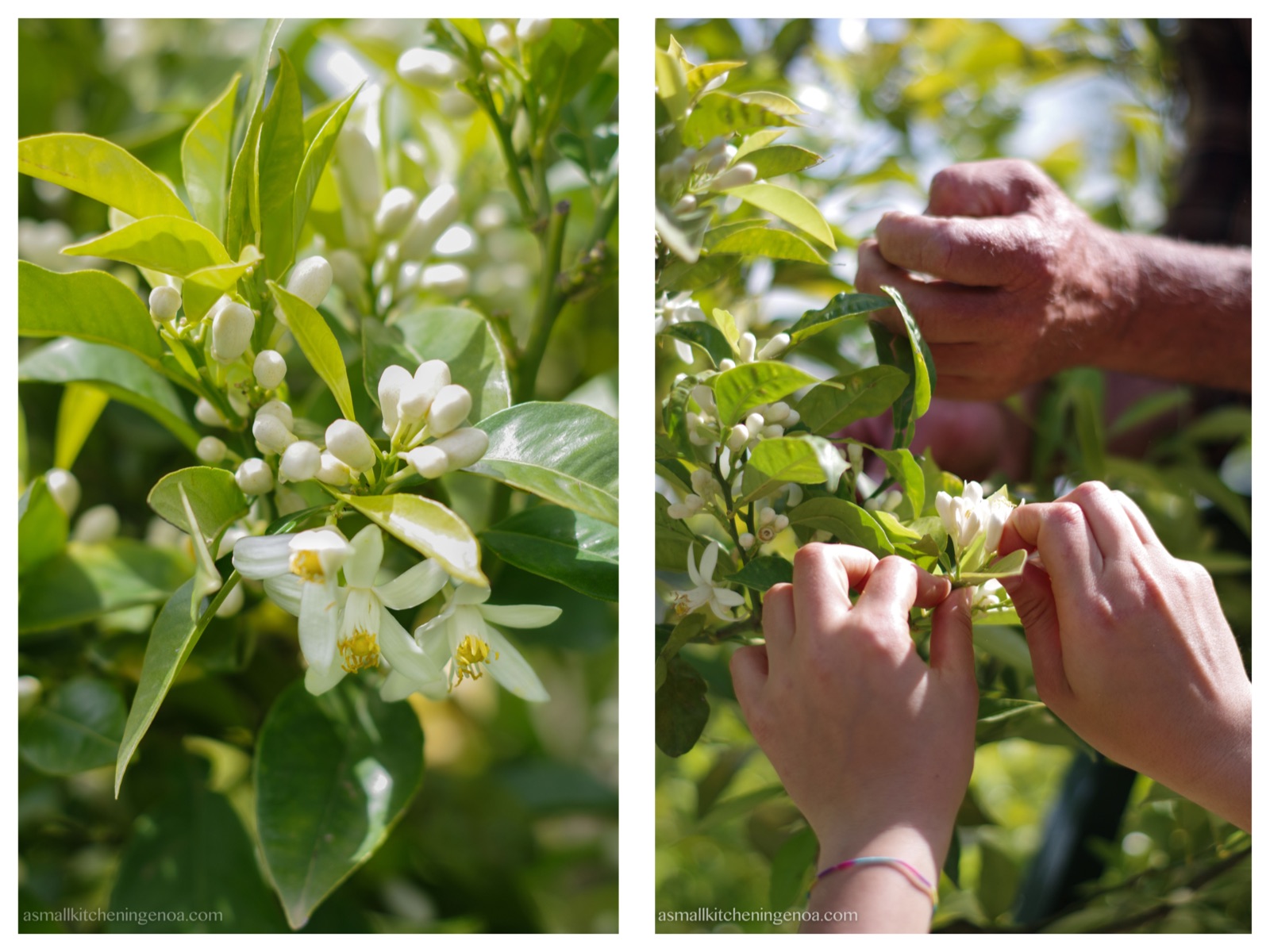 And in this area just between Sanremo and Ventimiglia – particularly mild and temperate – in the eighteenth century the distillation of orange blossoms started. From this process orange blossoms water and the precious essential oil of neroli were obtained.

Bitter orange blossoms have such a delicate and sensual scent that they seduced the aristocracy for centuries. It is reported that Queen Marie Antoinette of France every day had a bath scented with orange blossoms water and that she smelled with this fragrance all the royal linen.

Anna Maria Orsini of Bracciano, Princess of Nerola, on her side, launched the fashion to perfume with bitter orange blossoms essence her gloves and for this in her honour the essence was named neroli.

Even our elegant and sophisticated Queen Margherita of Savoy, who spent long periods (and died) in Bordighera, never missed the opportunity to make a trip to Vallebona, backwards Bordighera, to stock up scented water and neroli. Her love for these products was so well known that the local pastry chefs in her honour invented the “queen’s biscuits”, a kind of ladyfingers scented with orange blossoms water. 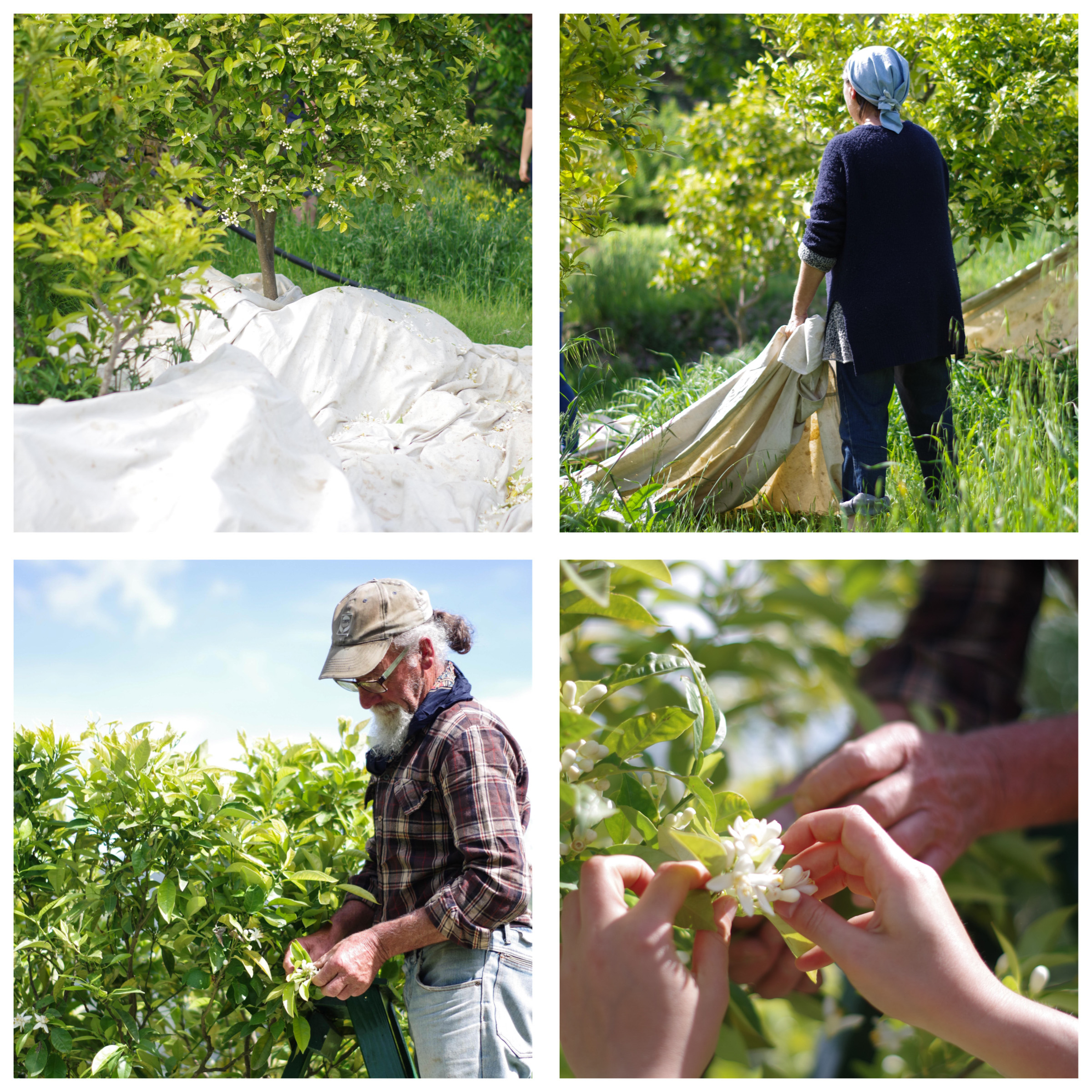 Not only in the perfumery universe but also in the art of pastry, in fact, bitter orange blossoms water found a place of honor for more than two centuries. Many traditional desserts, in fact, are characterized by this flavour. Not only Ligurian (such as Genoese pandolce, quaresimali, sweet focaccia and sweet ravioli, chifferi of Finale, rundi of Vallecrosia and fritters of Vallebona), but also Neapolitans (e.g. pastiera), Sicilians (the Cassata) and Provencals (such as the famous madeleines and the fougassette of Grasse). 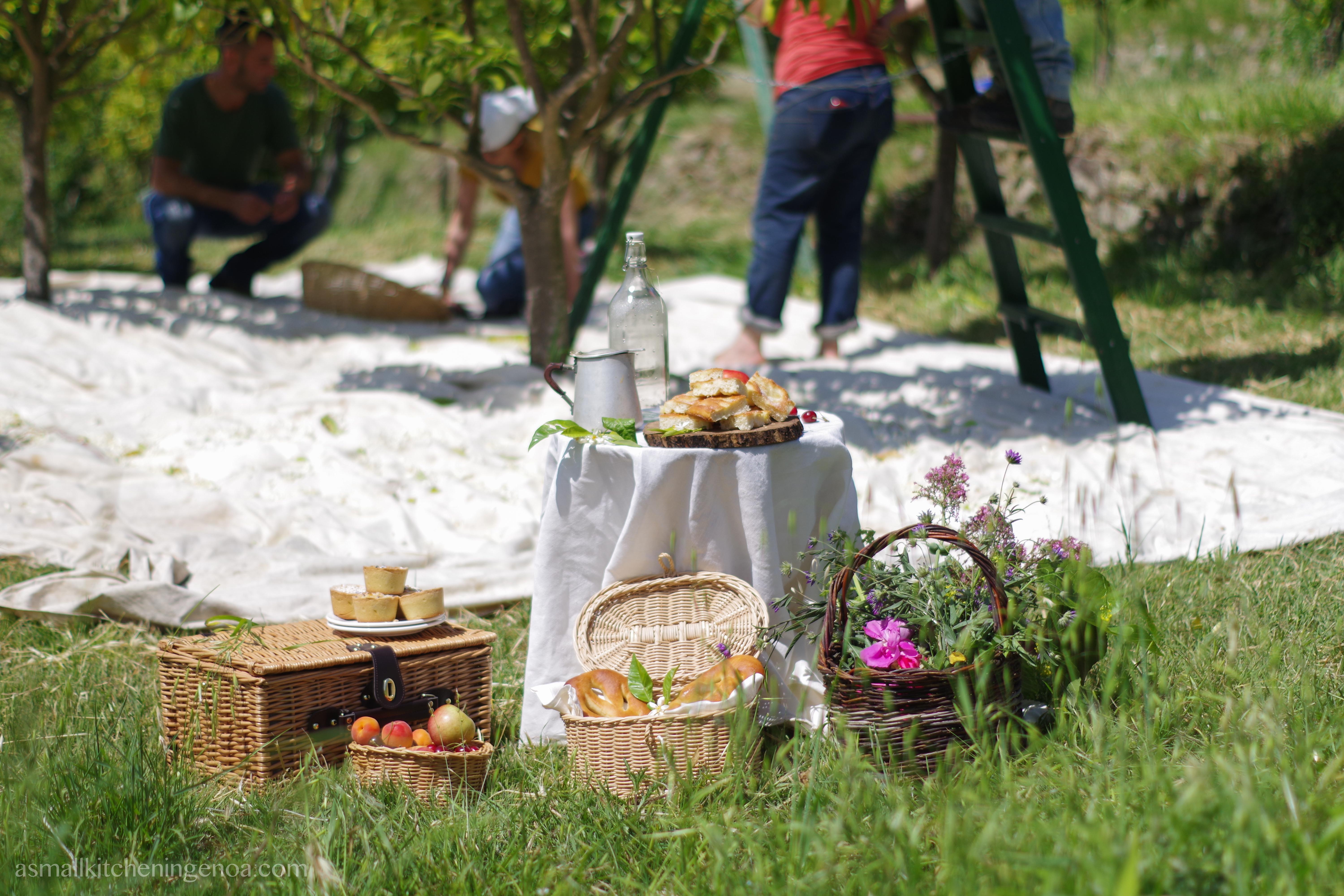 In the nineteenth century, in the hinterland of Bordighera, there was no garden, terrace or slope that would not host a line of bitter orange trees. When the harvest season arrived (between late April and early June), all the women in the area began to harvest orange flowers. Young girls – with small, delicate hands, perfect for harvesting flowers – came from the villages nearby and from South Piedmont too.

The flowers, harvested early in the morning, just opened, were let gently fall on white clothes lying beneath the trees. Then they were loaded in wooden boxes and taken to the village by donkeys, because there were no roads but only mule tracks. 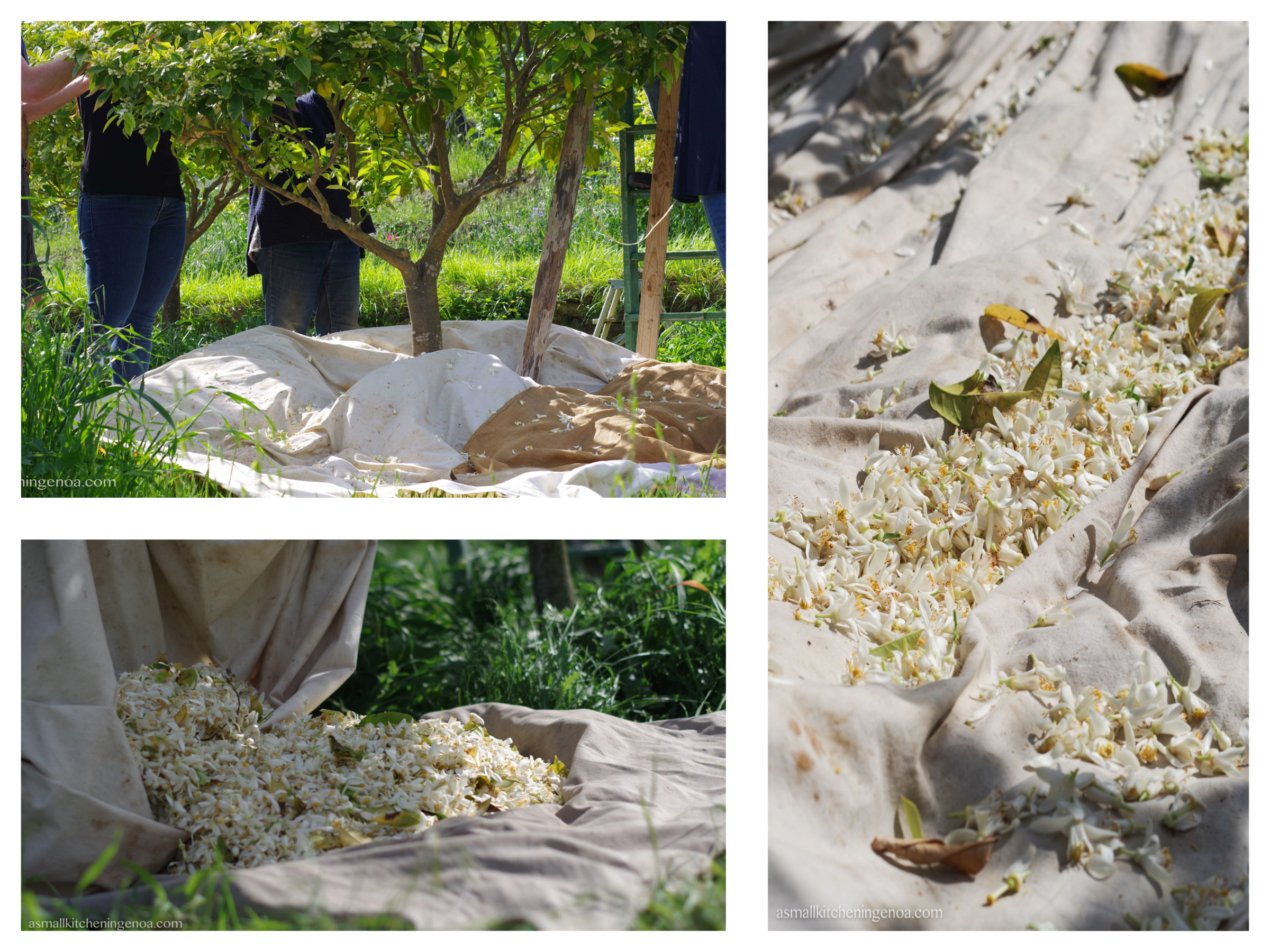 There, in a common warehouse, all the flowers producers conveyed their crop which was then re-directed to the three main distillery of the area to become orange blossoms water and neroli.

These were days of hard work but also of fairs, celebrations, exchanges, friendships and engagements.

The trade of the “aiga nafra“, as it was called in the area, and of the precious neroli were so flourishing that the economy of the whole area had been based on them for more than two centuries. 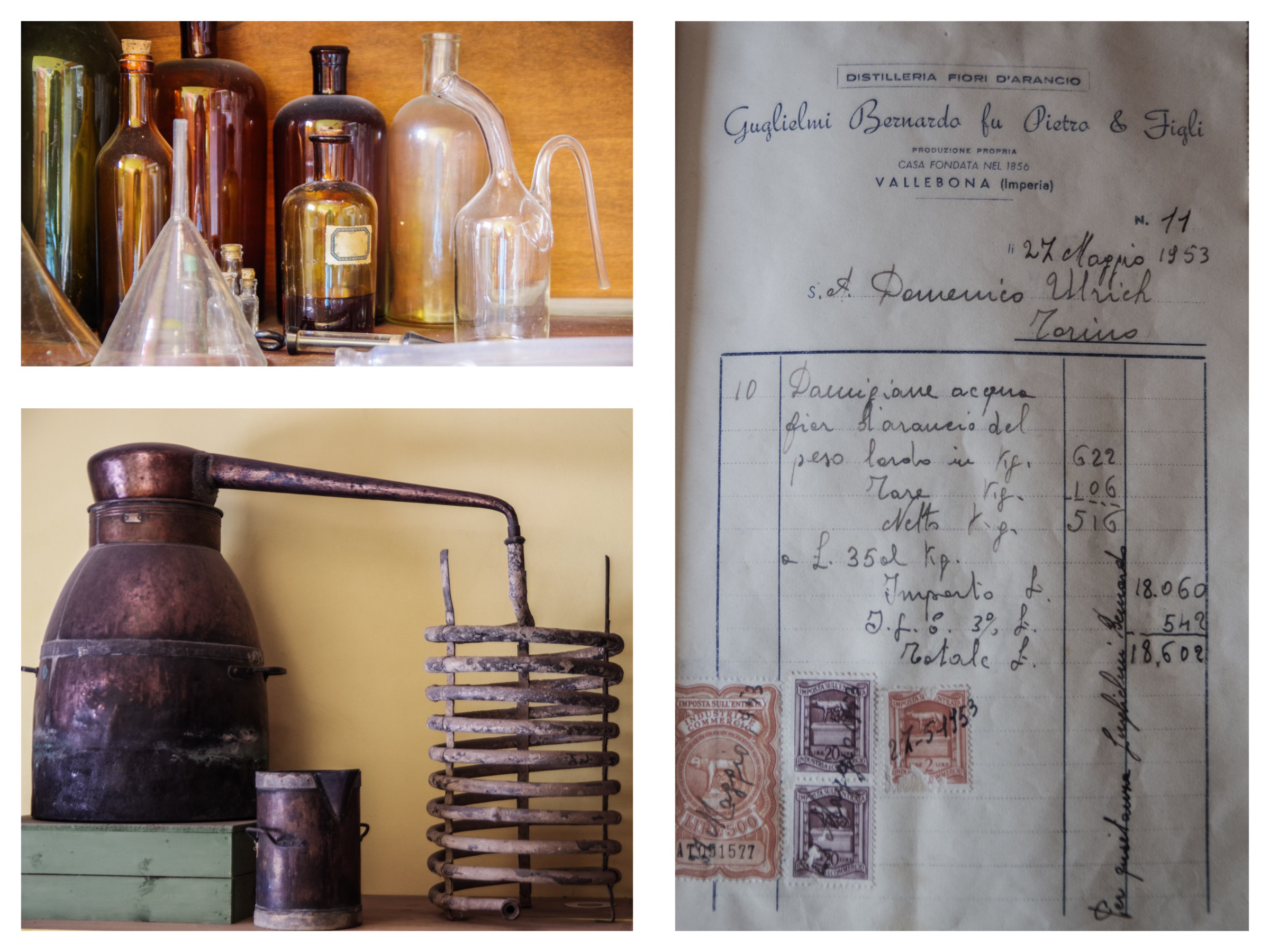 Then in the mid of the twentieth century, the chemical industry – which synthesized aromas with less efforts and at a sensible lower cost – took over and the interest in natural orange blossoms water gradually diminished. On top of this three terrible frosts (in 1969, 1970 and 1985) literally destroyed all the bitter orange threes in the area. So in 1985 even the last distillery remained active, Guglielmi Bernardo fu Pietro e Figli, with great pain of his owner had to close down.

Quite luckily, however, 7 years ago, the young Pietro, the sixth generation of the Guglielmi family, decided to look for bitter orange threes survived from the frosts and actually found two of them. He made many grafts, invested many hopes and with the help of his family members started from scratch the historic family business originally commenced on 1856. 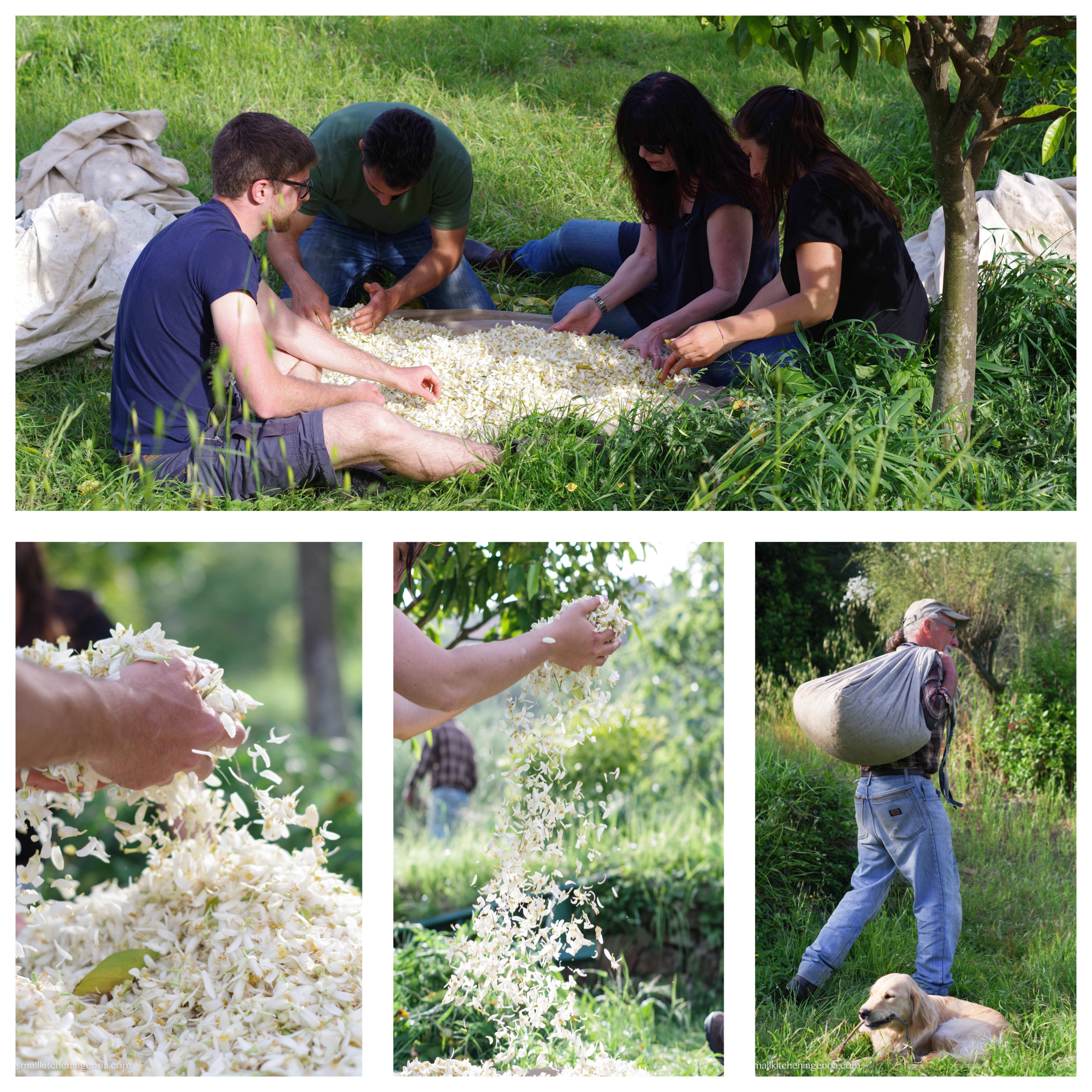 Today, Pietro cultivates many bitter orange trees in the heights of Vallebona with biodynamic methods and again in his La Vecchia Distilleria  distils orange blossoms,  just with natural techniques like they used to.

Freshly harvested flowers are poured into a large steel bowl where steam passes rising between the flowers and gently capturing their essential properties. The steam is then condensed through a cold water coil and precipitates in a long-spit jar called Florentine vase. Here water and essential oil naturally separate: the oil, which is lighter, floats and is sucked with a glass cannula and immediately bottled.

Water, on the other hand, is let decant for at least two weeks before being put in the bottles.

For every kilogram of orange blossom Pietro gets about 2 litres of water and only 1 ml of neroli (this is the reason why neroli is one of the most precious essences in perfumery). 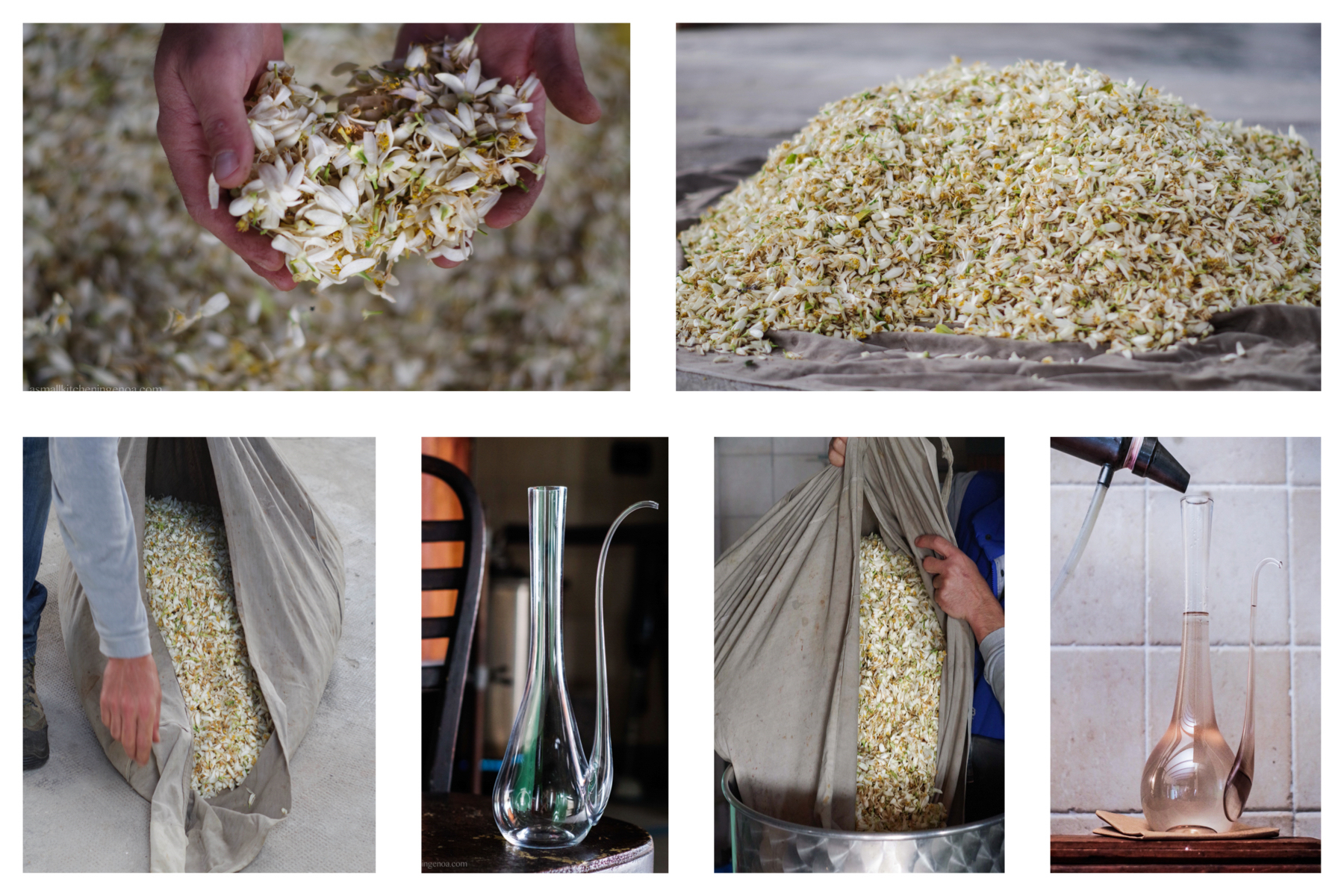 Pietro’s courage and determination to bring about an exceptional local product virtually extinct was  recognized and supported by Slow Food , which decided to include bitter orange blossoms water among the Liguria  Slow Food Presidia. 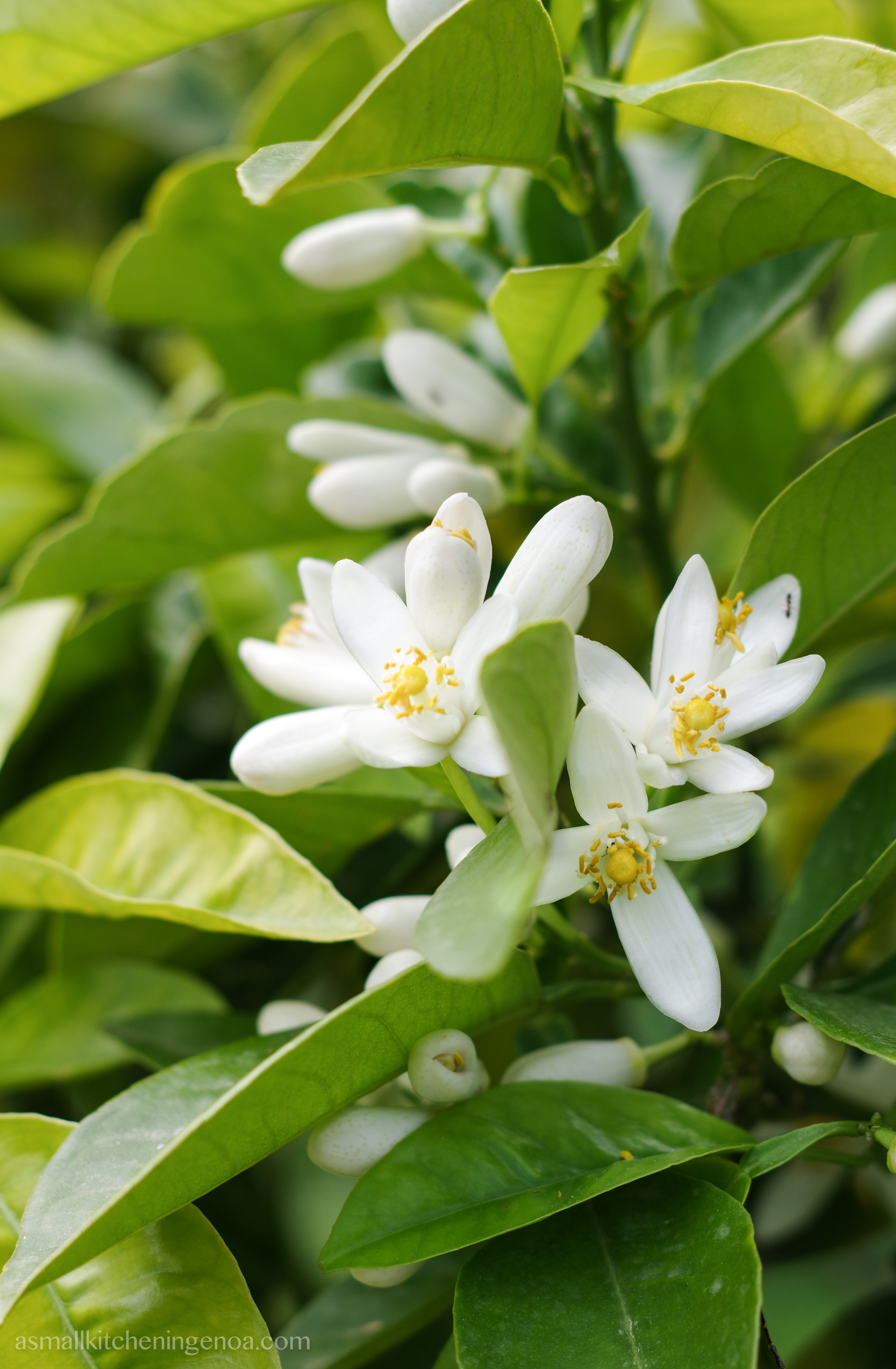 How to use orange blossoms water: 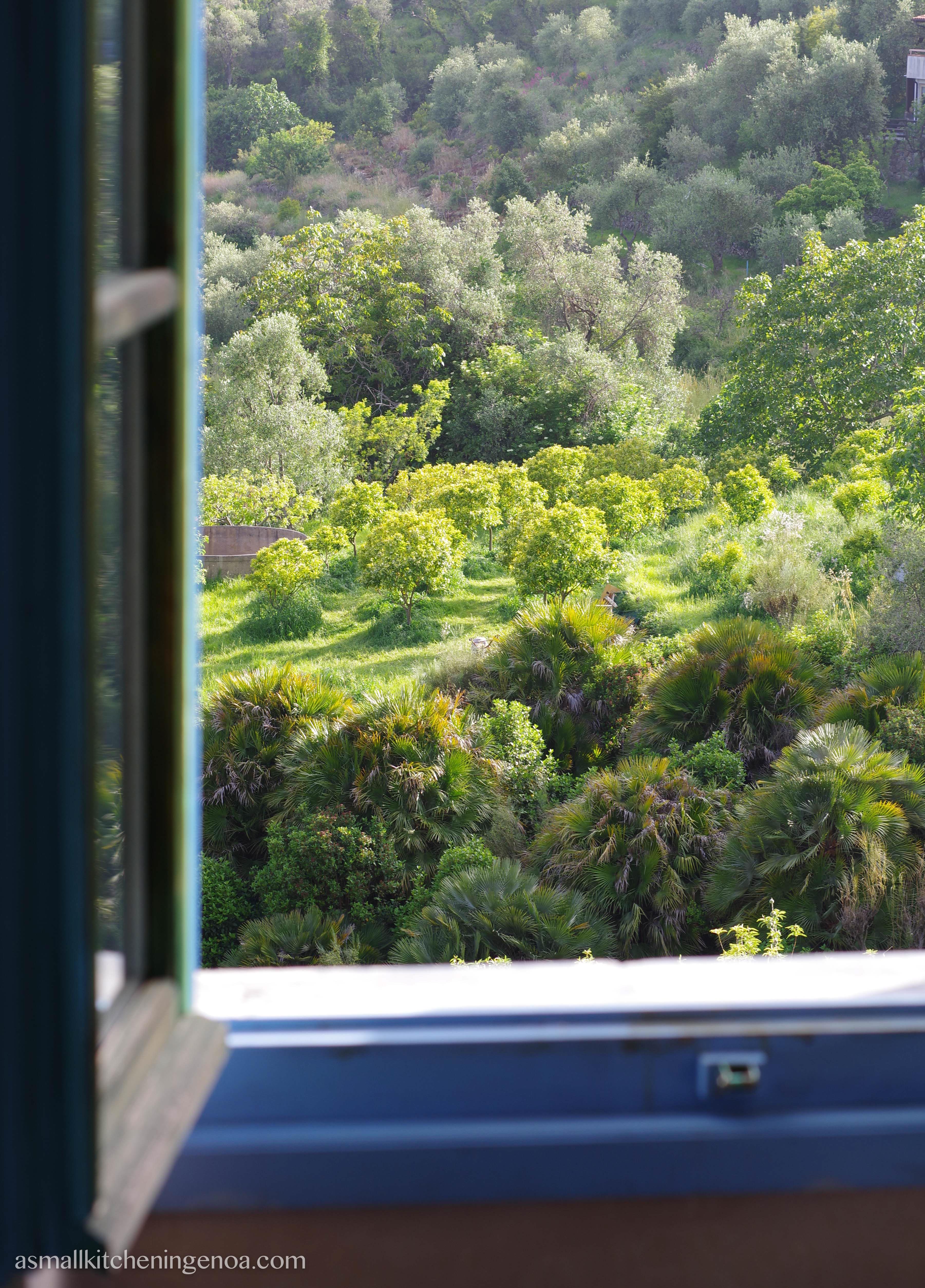 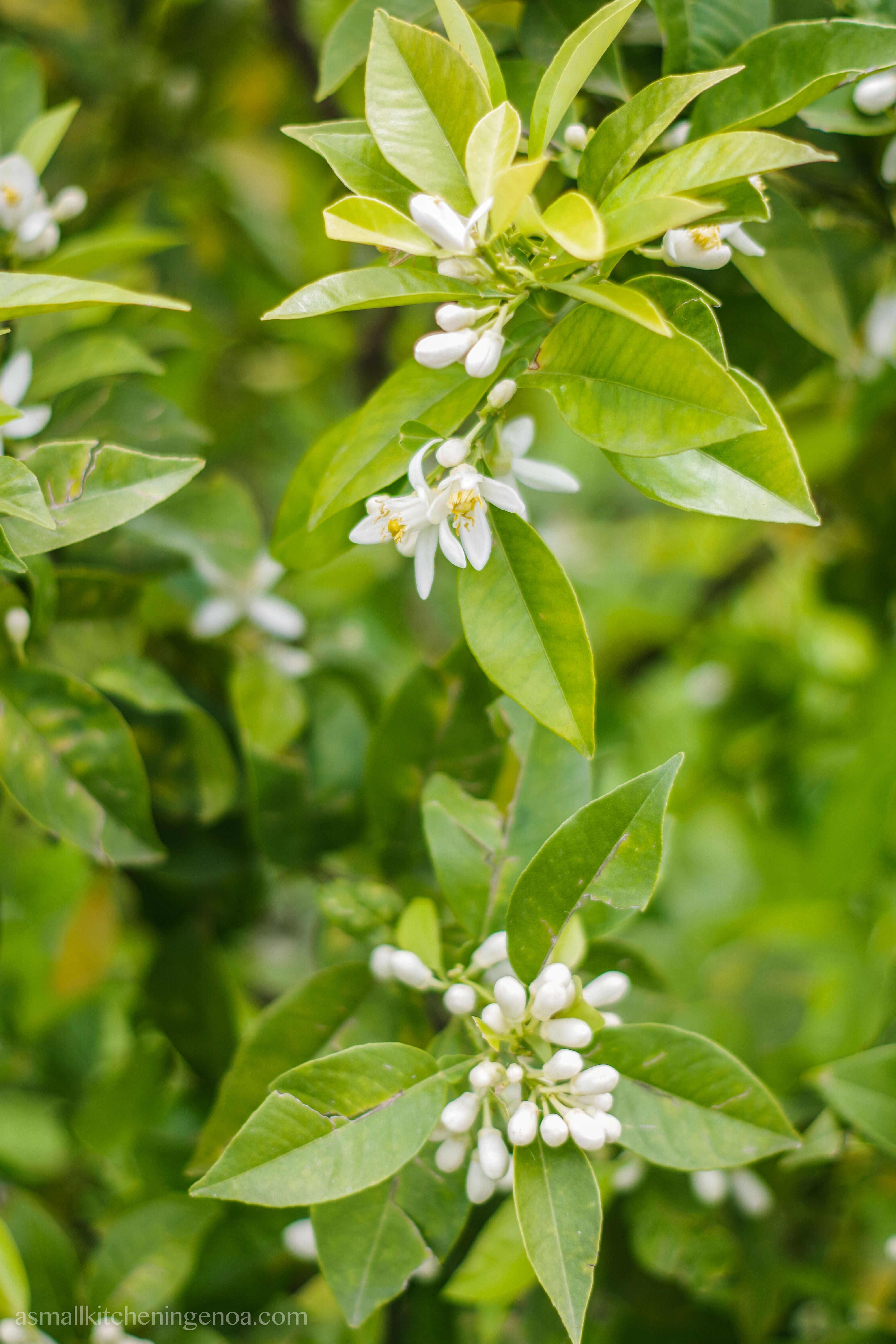 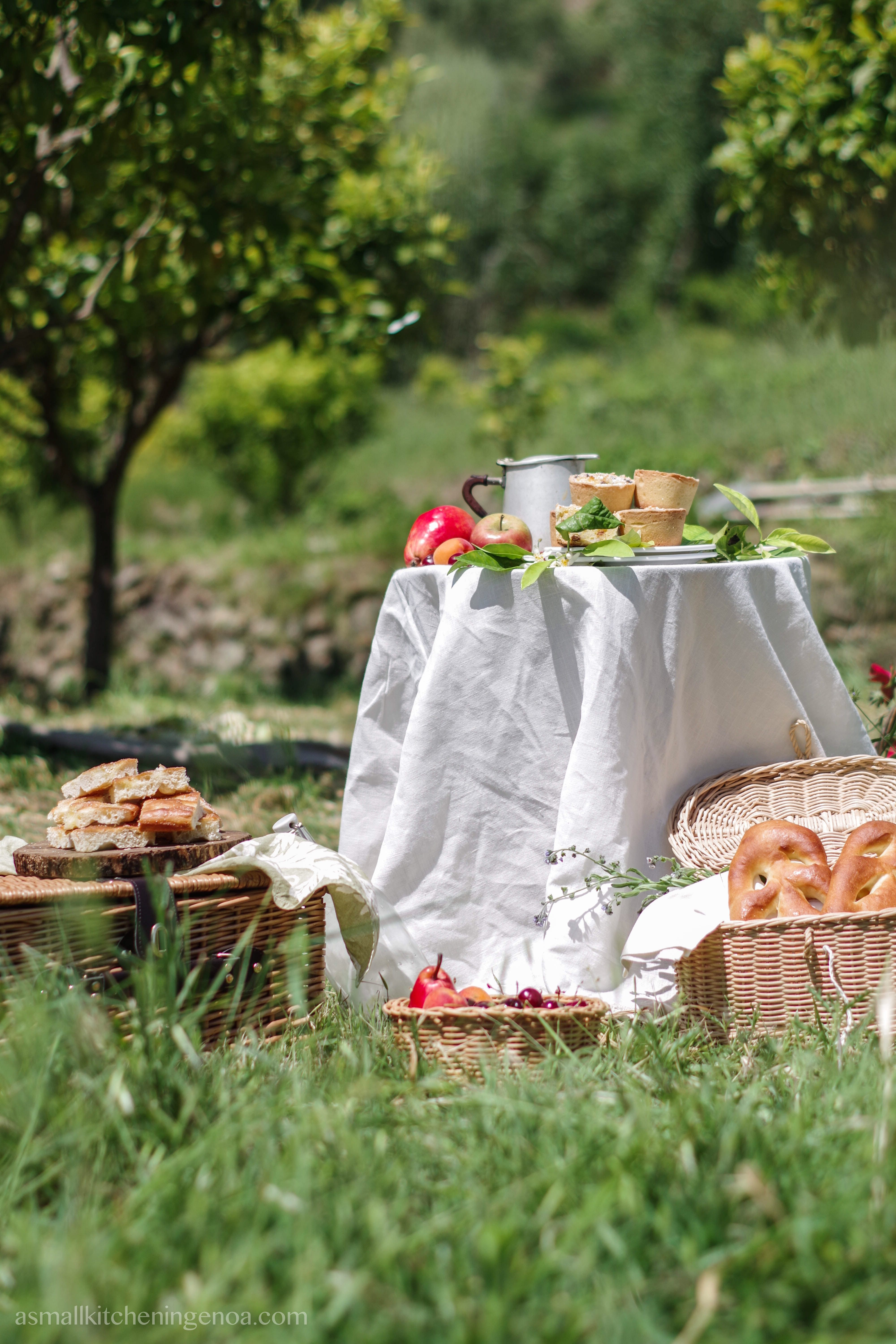 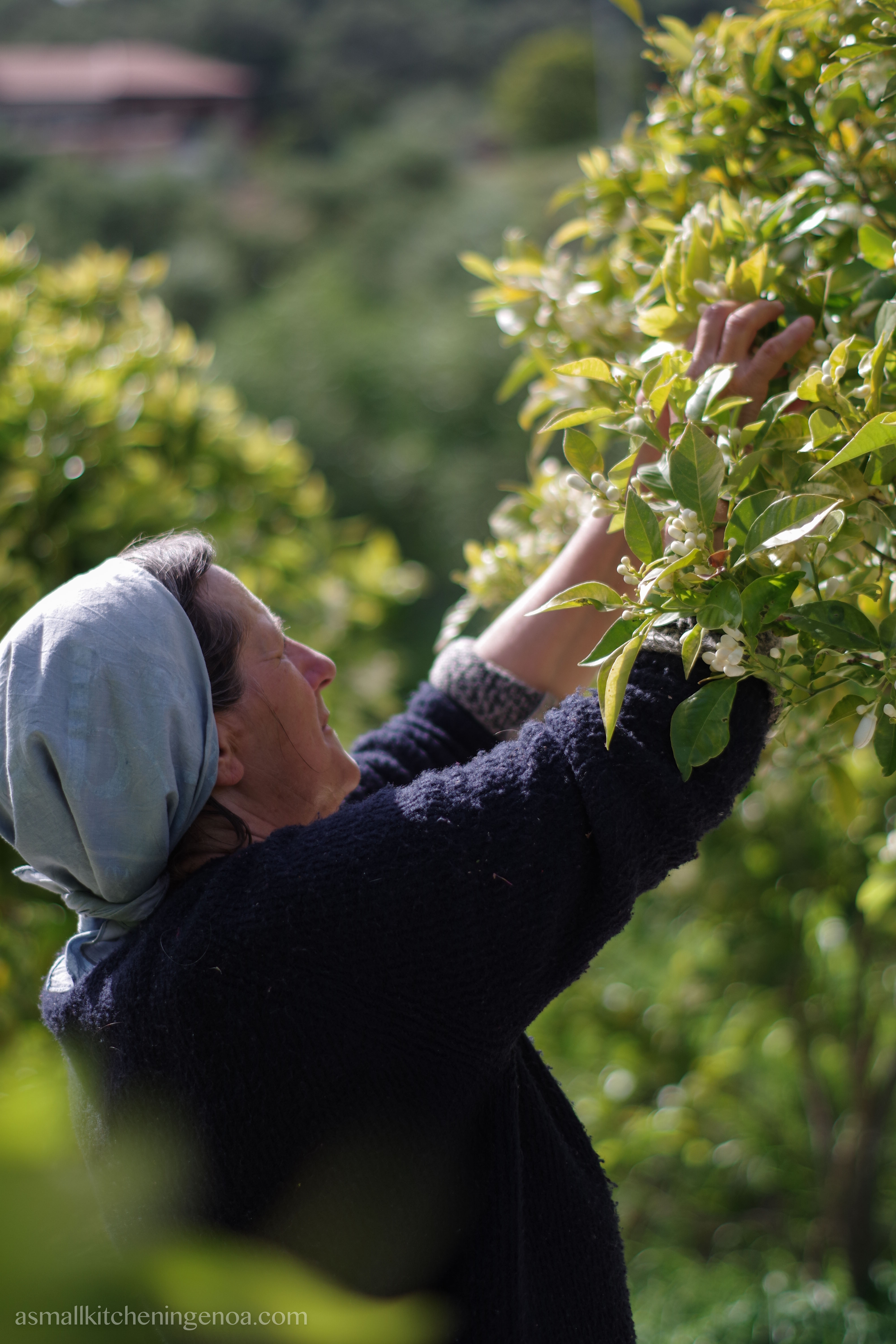 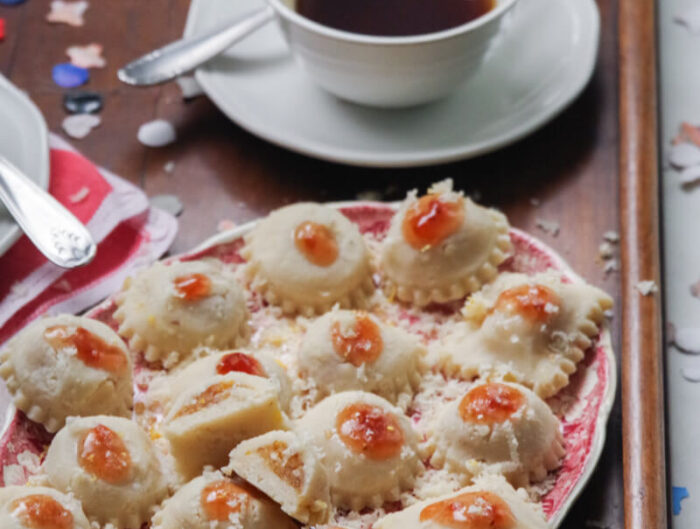 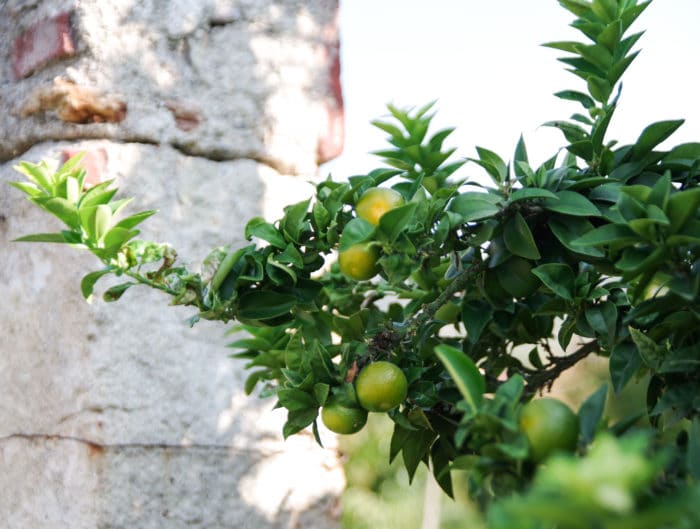 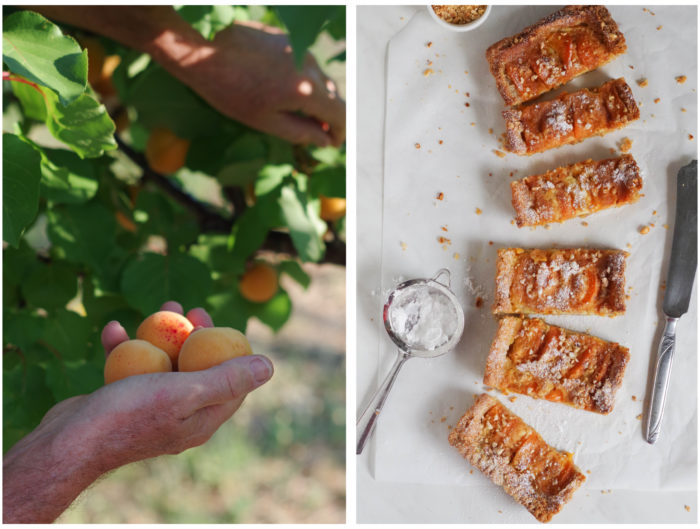 […] Liguria the aroma that distinguishes is that of bitter orange blossom water, of which our Region has been a great producer since ancient […]

[…] They are ancient Liguria sweets traditional in the Lent period and at Easter. They are made just with almonds, sugar, few egg white and orange blossom water. […]