Which are the Italian Riviera traditional pasta shapes? What are their origins? How are they made and seasoned? Where to buy some Ligurian pasta?

Maybe you don’t know that Genoa can easily be considered one of the most important cradles (although perhaps not the only one) of fresh pasta in the western world. If Sicily was the wheat field of the Mediterranean Sea, Genoa was the granary of Europe.

Yes, because the cunning Genoese merchants had already conquered the monopoly of wheatin the Mediterranean since the late Middle Ages: they bought wheat at very low prices mainly in Sicily, loaded it onto their ships, stored it all – up to the last grain – in gigantic warehouses in the port of Genoa and they then resold it at a high price (much higher during famine periods) throughout Europe. Paradoxically in Genoa, a city built on a rock and surrounded by sea and mountains, wheat was never lacking.

And this is why the art of kneading pasta spread very quickly in Genoa, probably learned from the Arabswith whom the Genoese had very frequent commercial contacts.

Pasta– which in Genoa also dries very well thanks to the sunny climate and the wind – soon became the food of ordinary people and of sailors– who can easily consume it on board given its long period of conservation – as well as a valuable goods to be trade.

Around 1500, then, the first corporations of pasta makers were founded (named Fidelai or Vermicellai): they grouped and protected the Genoese long lasting pasta makers, who would then become famous throughout the world for their “fine” fresh pasta as well as  for their dry pasta of small size.

Having made this very brief historical premise, let’s discover  what are the traditional pasta shapes – both fresh and dry – that you can find  in Liguria.

Tagliolini were perhaps the most widespread and common long pasta among the Genoese population. These are small and very long strips of white pasta (often without eggs) wrapped in bundle. Their traditional dressing is “tocco”, the Genoese meat sauce, or the basil pesto.

Fidelini, on the other hand, are the ultra-thin version of tagliolini. They can be eaten both dry and in broth. An ancient recipe suggests to cook them in a whitebait (baby fishes) soup.

Meanwile Trenette (probably from the dialect word “trenna”, which means string, or from the Arabic word “tria” which means wheat) are long, squeezed spaghetti with a medium-thickness rectangular section, first cousins of linguineand bavettefrom which they little differ. In Genoa this is the format that traditionally matches very well with basil pesto, potatoes and green beans. Their “advantaged” version (so called: trenette avvantaggiate) provides for the addition of poor (and therefore more advantageous) flours in the dough, such as wholemeal flour or chestnut flour.

Literally in dialect “Silk handkerchiefs”,  Mandilli de Sea are very very thin lasagnas of about 15 cm per side, today very difficult to find in restaurants and in home kitchens. Their fragility requires special care, in fact theoretically they should be served two at a time, freshly drained from the cooking water (to prevent them from sticking to each other) and spread with pesto or meat sauce.

Picagge, which always born from a large disk of fresh pasta rolled out with a rolling pin (less subtly than Mandilli), instead, have a different shape. Their name in dialect means “ribbons” and this is why they are large noodles about 3 cm wide. If boiled borages, finely blended, are added to the dough, we will have green picagge, very common and generally seasoned with the Genoese meat sauce.

In ancient times the term “Trofie” meant common “gnocchi”, a mix of flour and potatoes. With the term “Trofiette”, instead, they referred to what we call today “trofie” i.e. the small fresh pasta born in Recco hinterland, obtained kneading only tender wheat flour and water and with the characteristic curly shape.

Trofie from a predominantly local and domestic consumption became famous in Genoa and in the rest of Italy only in the last century, above all thanks to the mechanization of the production process. It is a pasta that has always been seasoned with the traditional basil pesto.

There is also the poorer version, “trofie di castagne” obtained by adding chestnut flour to the dough, and which was formerly seasoned also with milk cream or with prescinseua (a very very local fresh cheese).

Natalini or maccheroni or mostaccioli

Also called Maccheroni or Mostaccioli,  Natalini are the type of pasta characteristic of the Genoese Christmas dinner (hence the name). They have the shape of smooth thin pasta cannulas cut diagonally at the ends (like penne) and about 25 cm long. Generally, at Christmas they are boiled in capon broth enriched with few pieces of sausage and are called “Natalini in brodo”

These are the two types of very small dry pasta to add to soups because, due to their format, they do not overcook. Bricchetti, which in Genoese means matches, are similar to spaghetti but very short in length, about 3 cm. By Scuccuzzu or Scucussù, on the other hand, we mean a type of pasta made up of tiny cylinders of durum wheat semolina. The name recalls the Arabic cous-cous, from which this pasta probably originate, albeit in an extra large version.

The terms often intertwine creating not a little confusion, especially for those who are not accustomed to our regional cuisine.

Corzetti del Levante (also called Crosetti or, in dialect, Croxetti) are a fresh Italian Riviera traditional pasta made from durum wheat flour in the shape of a disks printed with special wooden stamps that leave impressed arabesque patterns. It is one of the oldest pasta shape, which seems to date back to the early Middle Ages. Originally the discs of dough were cut with the bottom of a glass and the decoration was impressed using a coin, on which often a small cross was embosomed, from which probably the origin of the name. With their spreading Genoeses began to produce special stamps in precious wood (such as pear, beech or maple apple wood) often carved so as to reproduce on the pasta a family crest. Traditionally in the East Italian Riviera you eat corzetti with a delicious pine nuts and marjoram pesto.

Corzetti della Valpolcevera, on the other hand, are a small format of soft wheat pasta, rolled thin, with an eight shape and a length of about one centimeter. Today their shape is regular because they are mass-produced, but once they were shaped by hand by pulling a piece of fresh pasta with your fingers so as to make it oblong with a narrower central part and flat and rounded sides.

Finally, there are the so called “Corzetti avvantaggiati”, produced in the territory of the municipality of Taggia (west Italian Riviera). It is always a fresh pasta, though obtained with unrefined flour, little water and eggs. Once a thin sheet is obtained, many rectangles are shaped which are then pinched in the center to form butterfly species.

Fresh pasta of the so called “white cuisine”

In the hinterland between Imperia and Albenga, in the Maritime Alps on the border with France(in the cross-border area dedicated to sheep farming and called “Briga”), there is a very special, very poor cuisine, born from the needs of the shepherds living in the area and commonly known as  “white cuisine” because characterized predominantly by white foods(potatoes, leeks, cabbages, turnips and cheese). This particular cuisine developed some really remarkable fresh pastas, very easy to prepare and very tasty.

First of all, pasta Sciancà, also known as Streppa e caccialà (“tear and throw there”), which consists of irregular lasagnette pasta obtained from a soft and elastic mixture of white flour and water which is torn by the dough mass pressing thumb and pointer  and thrown directly into boiling water . Usually in the water of the pasta potatoes and cabbage are boiling (or other seasonal vegetables) and the whole, once drained, is simply seasoned with a little extra virgin olive oil or bruss, a famous fermented sheep ricotta produced in area.

Typical of that region are also  Bastardui, small balls (gnocchi) of dough obtained mixing flour, water and boiled seasonal vegetables (such as zucchini, green beans, cabbages). They are traditionally seasoned with leeks and cream.

And then there are Sugeli: small balls of dough (gnocchetti) kneaded only with flour and water and decorated with the typical “corpu de diu” (literally God’s smack), a fingerprint in the center that makes them similar toorecchietteand that are usually seasoned, even these, with bruss.

On the opposite side of the Riviera, on the border with Tuscany, the Testaroli and Panigacci are typical. What is the difference? Although the dough is very similar – a liquid batter made of flour, water and salt – the consistency, shape and cooking method make the two preparations very different from each other.

Testaroli, whose mixture is more fluid, are cooked in a wood-fired oven in large cast iron pans (so called testi). Those made in Pontremoli, in Lunigiana (Tuscany), are the best known and are large discs of dough, which are cut into lozenges, quickly boiled in water and seasoned with a raw pesto or with tomato sauce.

However, there is also a typical version of Sarzana and of the lower Val di Magra (eastern part of the Italian Riviera) , which differs from the Tuscans due to their smaller shape, always dull, which is not cut into pieces.

Panigacci(originating from Podenza, in Tuscany, but also common in extreme eastern Liguria and in some inner Valley) instead, the batter – thicker than that of Testaroli – is poured into small, flat terracotta plates with a small raised edge, which previously was set to heat up on a fire or in the fireplace.

Testaieu, finally, are a gastronomic specialties of Val Graveglia, a narrow valley in the eastern province of Genoa leading to the sea. They are kinda pancakes, flat breads just made up of flour, water and salt. They are traditionally cooked in wood ovens in particular terracotta small pans and they are slightly thicker, especially in the center, than testaroli. They are usually seasoned with a rustic pesto, with tomato sauce or with mushroom sauce.

There are some local pasta makers strictly focused on the production of traditional Italian Riviera pasta shapes. Here are my favorite: 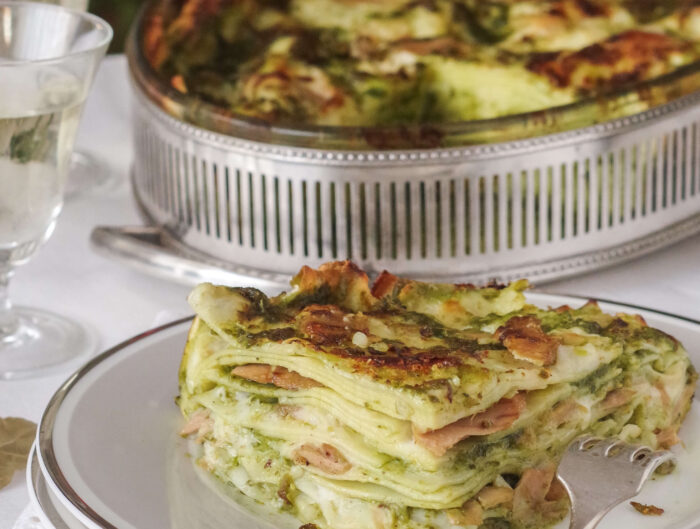 Lasagnas with pesto and tuna, from far far away.
6 January 2021 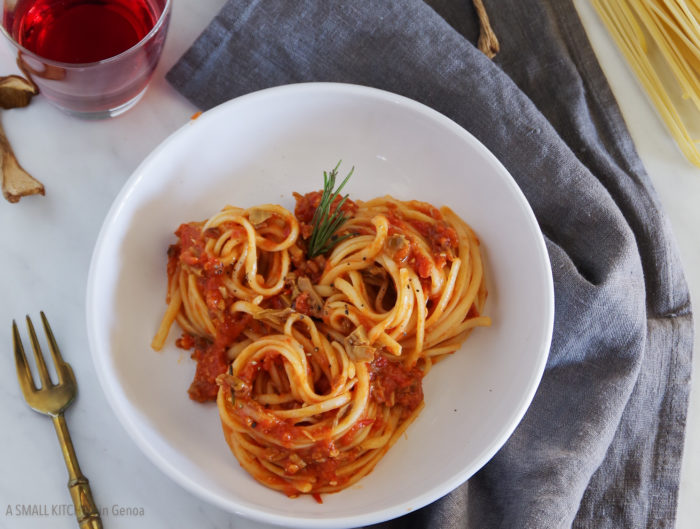 Thank you, this was absolutely fascinating. I love your corzetti stamp!

I love the complete way you lead your audience to the subject.

No single word is to much. It is such a pleasure to read to the end of your story and than realize that you have to offer an additional surprise.

[…] Italian Riviera cuisine! If you are still curious I have published this post on Ligurian different pasta shapes and a short guide on Italian Riviera Wines . Other small Liguria food guides like these will be […]