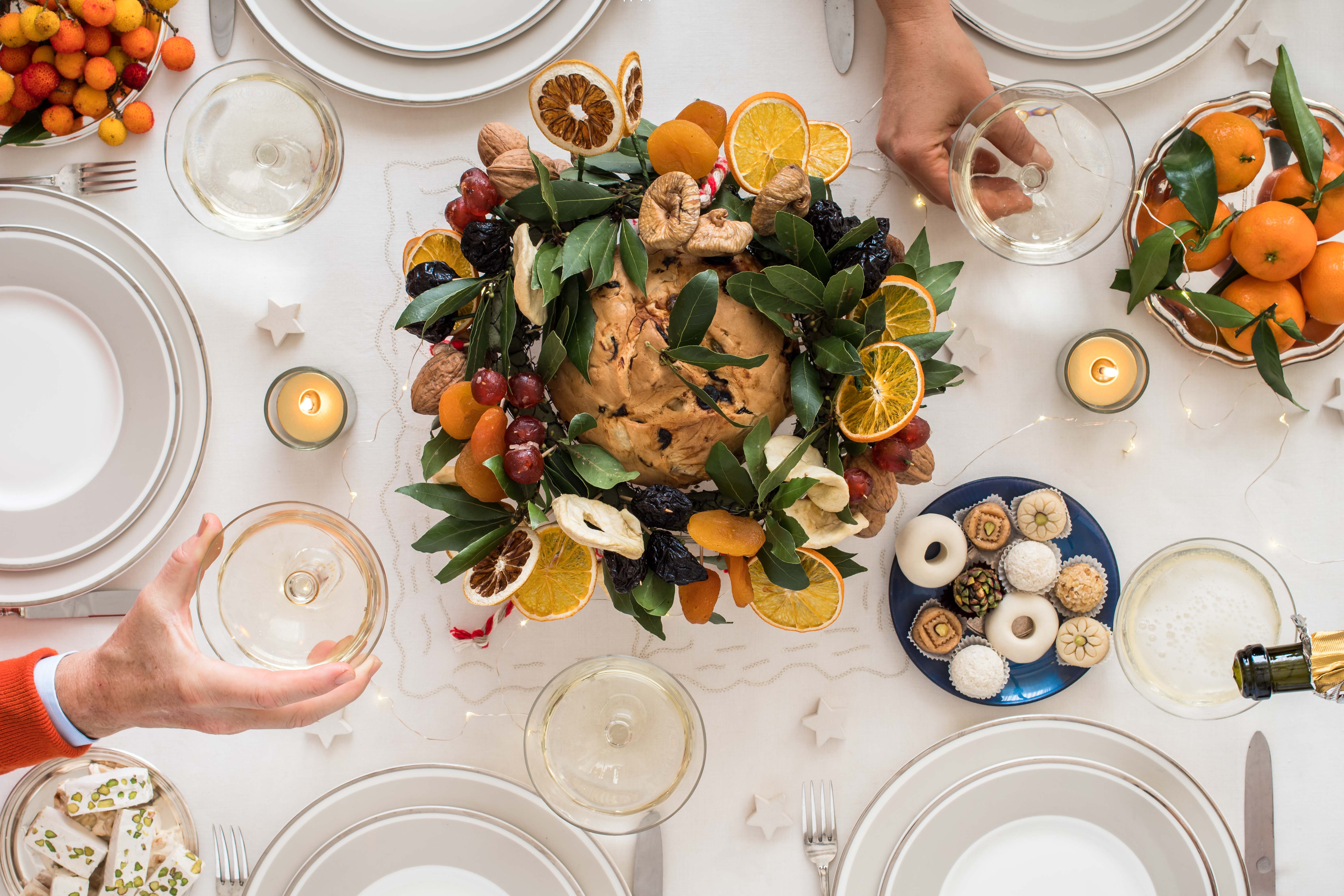 This year for Christmas I chose to brush up some Genoese traditions that are lost in the memory of the old, those made of large and small rites that every child in Genoa once lived when the Holy Night was approaching. And I also thought about a couple of ideas to bring home a little bit of those old habits allowing them to survive.

Let’s start from the history …

The undisputed protagonist of the Christmas festivities in Genoa has always been bay, the real and original Genovese Christmas tree. The fir tree has in fact started to spread as a Christmas decoration only around the 70s chasing North-European / Anglo-American traditions. Before – long before – it was bay tree that symbolized Christmas and adorned streets, houses and tables of the Genoese. Bay, an ancestral symbol of peace and prosperity.

It was in fact a big stump of bay “o Confêugo“ that the Abbots of the Folks, representing the Podesterias of Bisagno, Polcevera and Voltri, from the beginning of 1300 brought as gifts to the Podestà first, then to the Captain and finally to the Doge, on Christmas Eve as a wish from the populations living outside the city.

The Confeugo was handed over to the authorities in front of Palazzo Ducale (the site of Genoa public authority), where it was lit and turned off with a jug of sugar, wine and confetti. The smoke that ensued, depending on whether it was straight or crooked, predicted the outcome of some problems afflicting the city. The population then contended for the remains of the embers because they were said to have magical properties and bring good luck.

Every year the ancient ceremony of the Confeugo is repeated with the Mayor and Prior of the “Compagna” (an old association) representing respectively the Doge and the Abbot.

This year the Confeugo event will be held on December 22nd.

Always bay was the one that once was given for Christmas by the milkmaids who brought milk to the families of the towns from the hills of the Genoese hinterland. And yet with a large “ramma” (branch) of bay butchers and roasters used to decorate their shops.

In the houses, then, families used to decorate a large branch of bay, “o cimello”, with oranges, tangerines, sweets, Christmas maccheroni (the so-called “Natalini” that are eaten in broth on Christmas day), and dried fruit:the figs that Ligurian farmers dried in the sun, the walnuts that were synonymous of money and prosperity and the prunes, in Genoa also called «damasco» because of their ancient Syria origin.

All these things were then tied to the tree with red and white ribbons, the colors of the city of Genoa: the flag of the Genoese Republic is in fact made up of a red cross in the white field (yes, like the British one…the Genoese borrowed it to the British long long time ago.

Finally, pandolce,the Genoese Christmas cake par excellence (the ancestor of the famous UK “Genoa cake”) was always brought to the table with a small branch of bay planted in the center, to wish the whole family peace and fortune (you can find more funny stories on pandolce in this post)

My Christmas idea no. 1: a yummy wreath of bay. 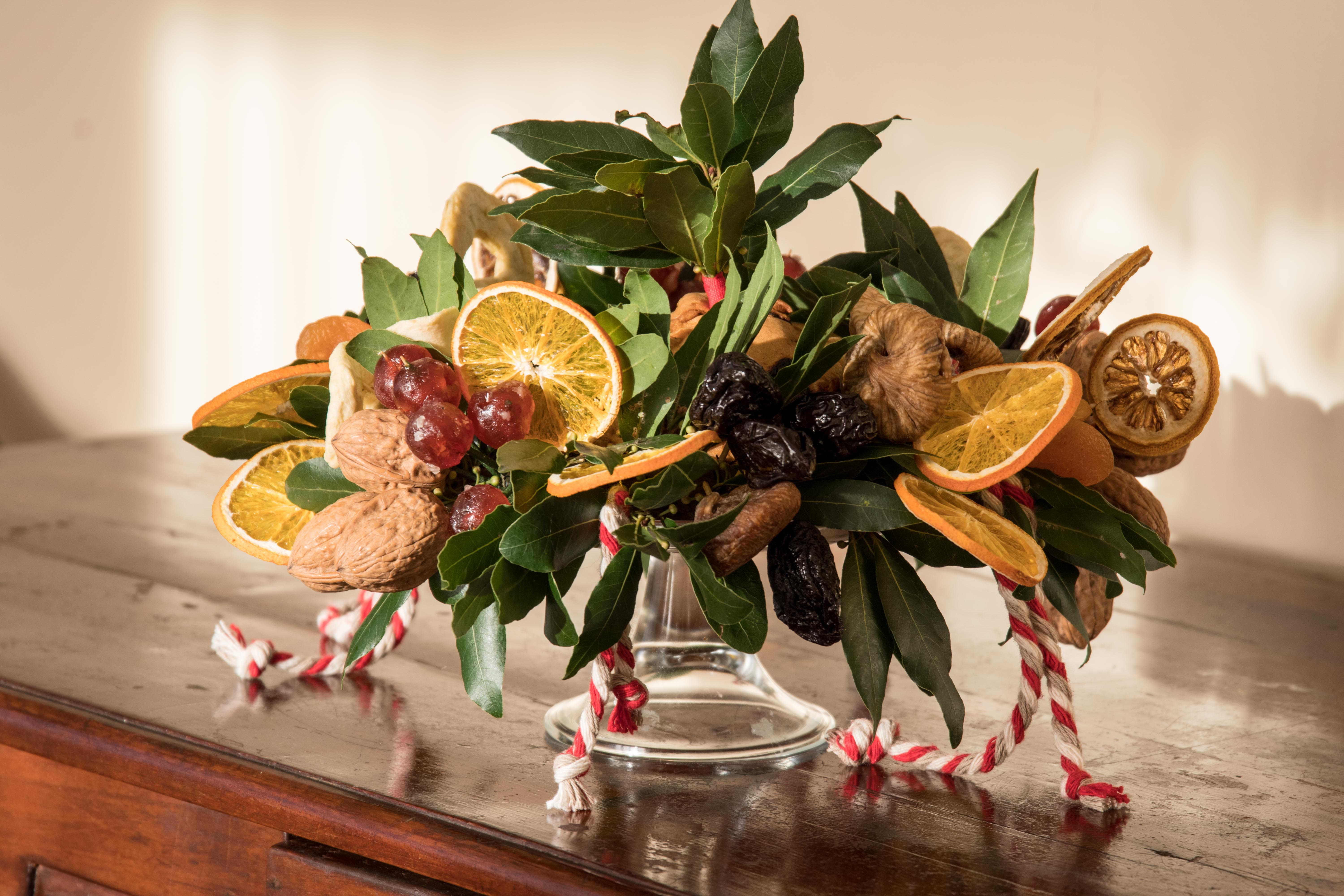 This year I had this Christmas idea: a wreath of bay decorated with dried fruit, oranges and red and white ribbons designed for the table, to surround and embellish the Genoese pandolce. A garland that contains both the tradition of “cimello” and that of the auspicious twig inserted in the pandolce. A decoration that does not only satisfy the sight but can also be enjoyed together with the closing of the Christmas meal.

Because the art of weaving flowers does not belong to me, I asked my friends Elisabetta and Silvia of Floratigula flower decoration school to help me with this small project. Together we developed the idea and filmed – between anxieties and lot of laugh – the video tutorial you will find below.

The wonderful pandolce that speaks for itself was given to us by the Panarello pastry shop  while the beautiful dried fruits (which were chosen piece by piece almost escaping the patience of the salesgirl) were donated to us by Fratelli Armanino shop, one of my favorite historical shops.

Now enjoy the video (which I’m very proud of because it is one of my first cinematographic experiences), soon after you will find everything you need and some practical directions to make the wreath as Silvia and Elisabetta  did.

What you need to make the Christmas sweet wreath:

An Oasis-style sponge (found at the florist)

green ribbon to wrap the toothpicks 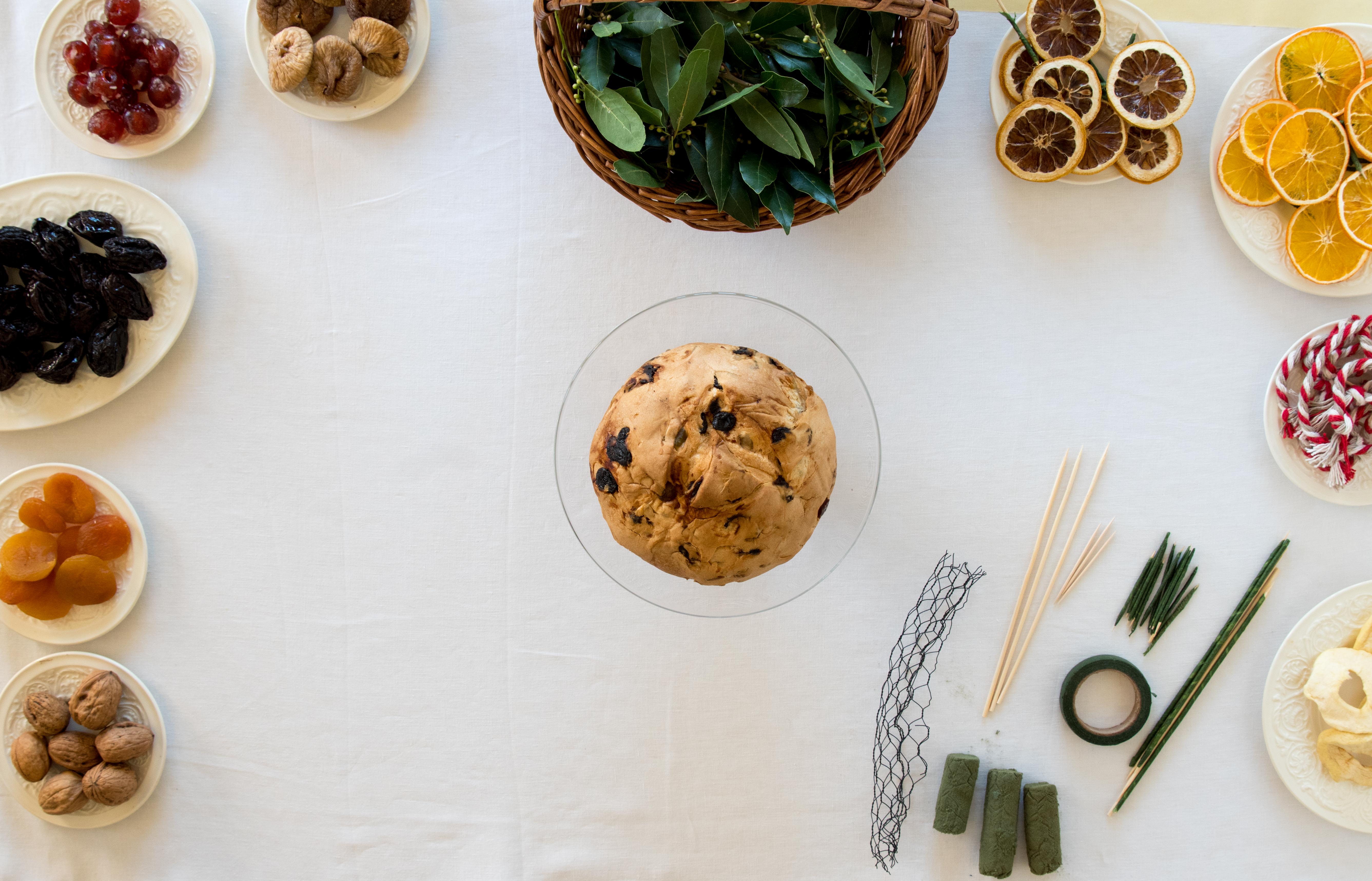 The Genoese pandolce you see in the video and photos is ½ kilo, with a diameter of about 16 cm. Based on its circumference – about 25 cm – we calculated everything needed. It goes without saying that if you want to beautify a larger pandolce  (or a different cake) you will have to get more material.

If you do not have a glass cake stand you can easily replace it by fixing (with double-sided adhesive tape or hot glue) a plate on an inverted glass.

Silvia and Elisabetta cut two rectangles of henhouse net with iron scissors and made 8 Oasis sponge rolls of about 6 cm length, cutting them out from a larger sponge cube. It is not necessary, however, that they are cylinders, just make small parallelepipeds with a base of 1.5 cm x 1.5 cm. They then rolled 4 oasis rolls into each net rectangle and stopped the whole with some wire creating 2 sausages about 14 cm long each. They then tied the ends of the two sausages together with the wire, modeling the support crown to be placed around the pandolce/cake.

For the base of the wreath, Silvia and Elisabetta chose fresh bay florets (better with small leaf), about 7-8 cm long and with 4-6 leaves each. The twigs were directly inserted into the sponge of the support crown, evenly but without making a garland too thick. If necessary, as in the video, some florets can be added at the end.

All the dried fruit was skewered into the toothpicks and then placed between the bay leaves in groups. To disguise the toothpicks have been covered with green florist’s tape but for simplicity they can also remain natural provided they are covered by the leaves.

In memory of the colors of the Genoese flag, then, white and red cords were added to the sides of the wreath so as to hang on the table (they were simply fixed by sticking them in the middle with a toothpick). If you do not find them you can replace them with simpler red and white satin ribbons.

Finally, at the center of the pandolce, as tradition dictates, a tuft of bay was added!

Since the wreath is in contact with the pandolce, the florist sponge was not soaked in water, so the bay b has no way to drink. This is why the wreath is as beautiful as it is ephemeral: it lasts for three days and then begins to dry out. I therefore suggest you to prepare it one or two days before Christmas.

It will be a beautiful centerpiece and at the moment of the dessert you will have already on the table pandolce, dried fruit and nuts to celebrate as Genoese tradition rules! 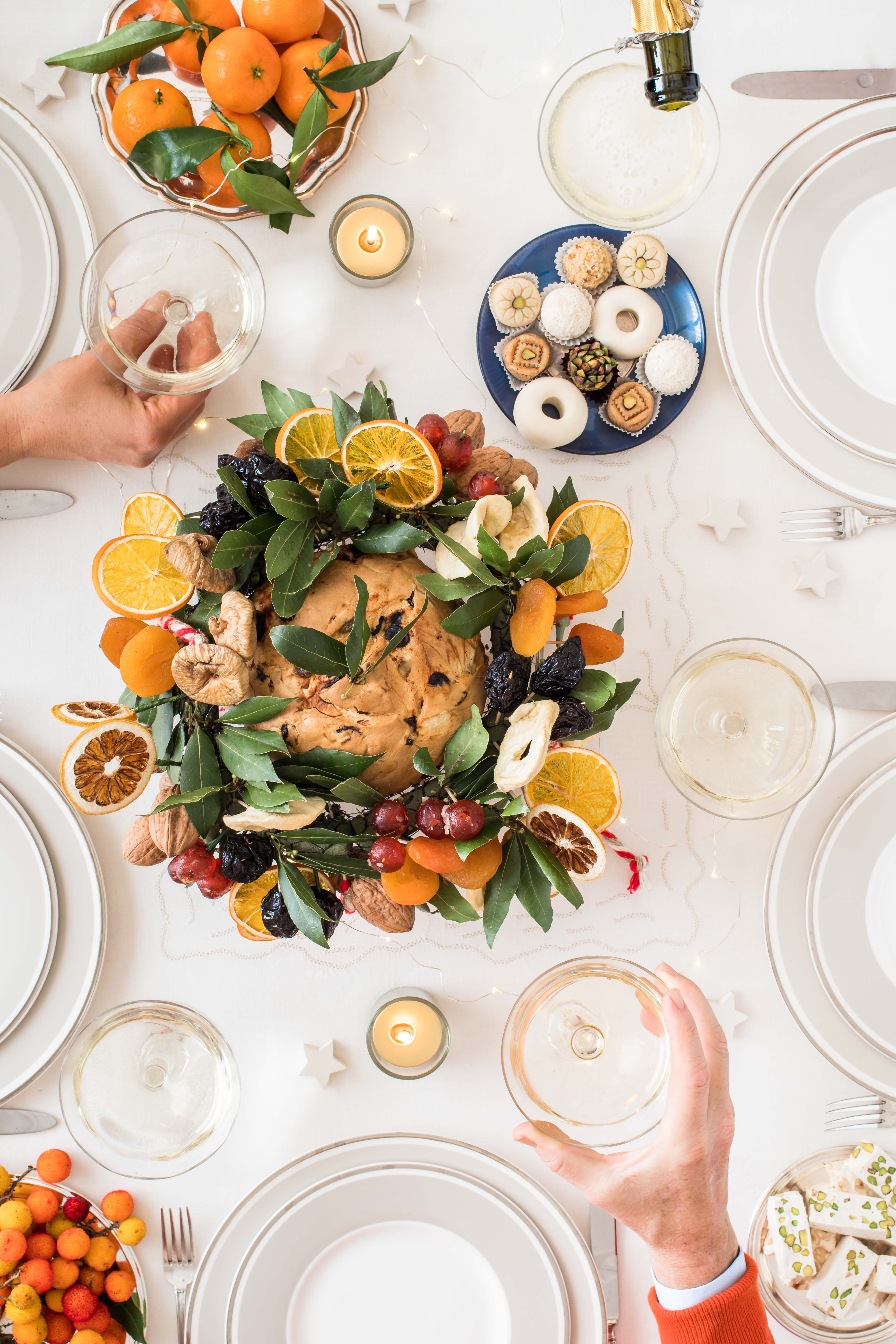 My Christmas idea no 2: a revised version of the traditional “çimello” 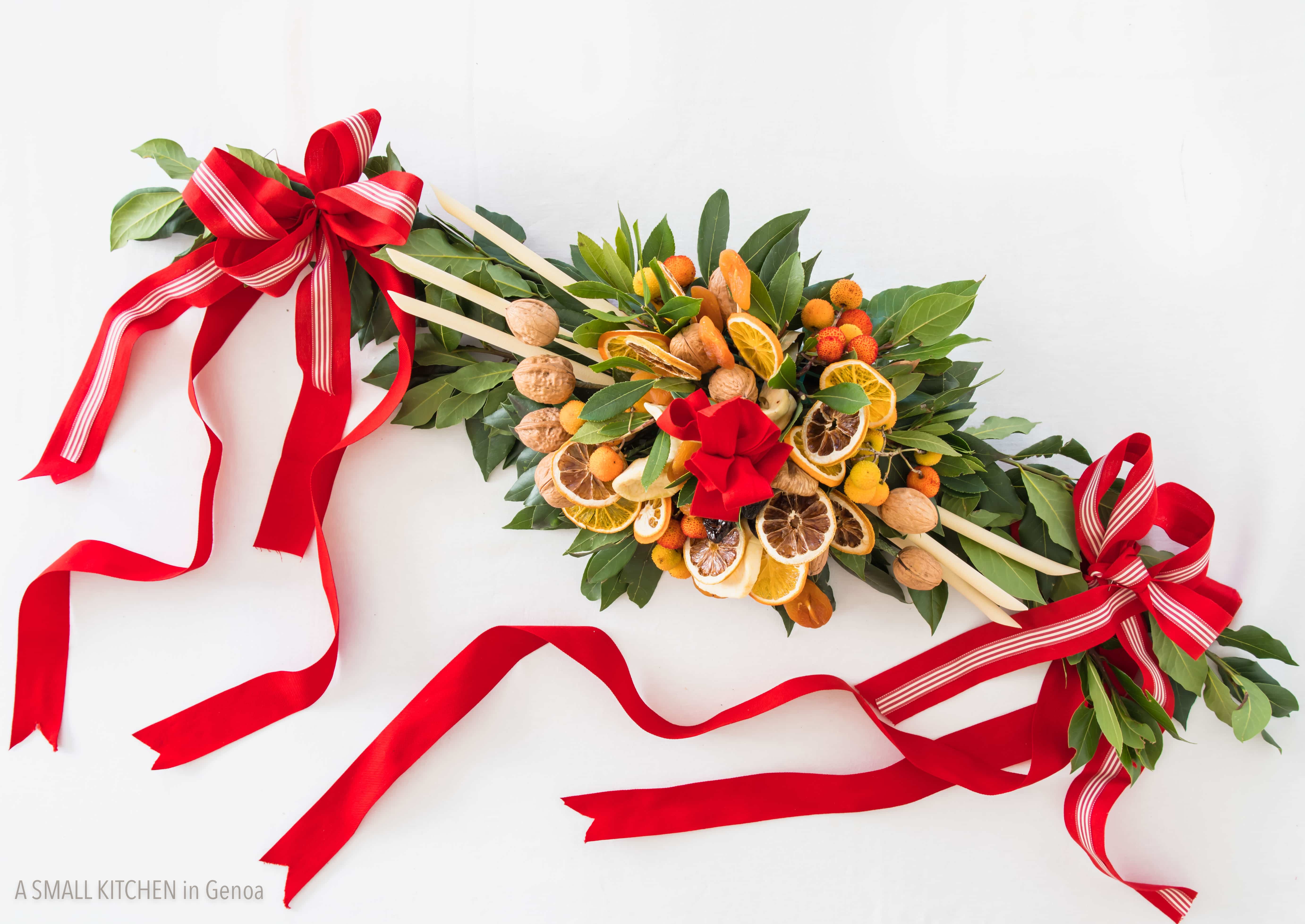 The wreath was the first project we made. Then, on the wave of enthusiasm, we decided to propose a rather “stylistic” version of the traditional cimello, the branch of bay adorned with dried fruit, macaroni and ribbons that adorned the Genoese houses at Christmas.

We thought of a decoration to hang on top of a door, which welcomes guests on the doorstep of the house or of the dining room.

I launched the idea, Elisabetta and Silvia put together the pieces – in a strict sense and in a broad sense – and have created this wonder.

To you the video to do it at home if you want to test yourself!

What you need to make the cimello:

2 triangles to hang the paintings and the related nails

green ribbon to wrap the toothpicks

10 slices of dried oranges (if they advance badly)

As for the wreath, the dried fruit and walnuts were stuck into the toothpicks.

Moreover, even in this case, the sponge is not wet with water, so the bay will tend to dry after 3/4 days. It is therefore advisable to prepare it a couple of days before Christmas. 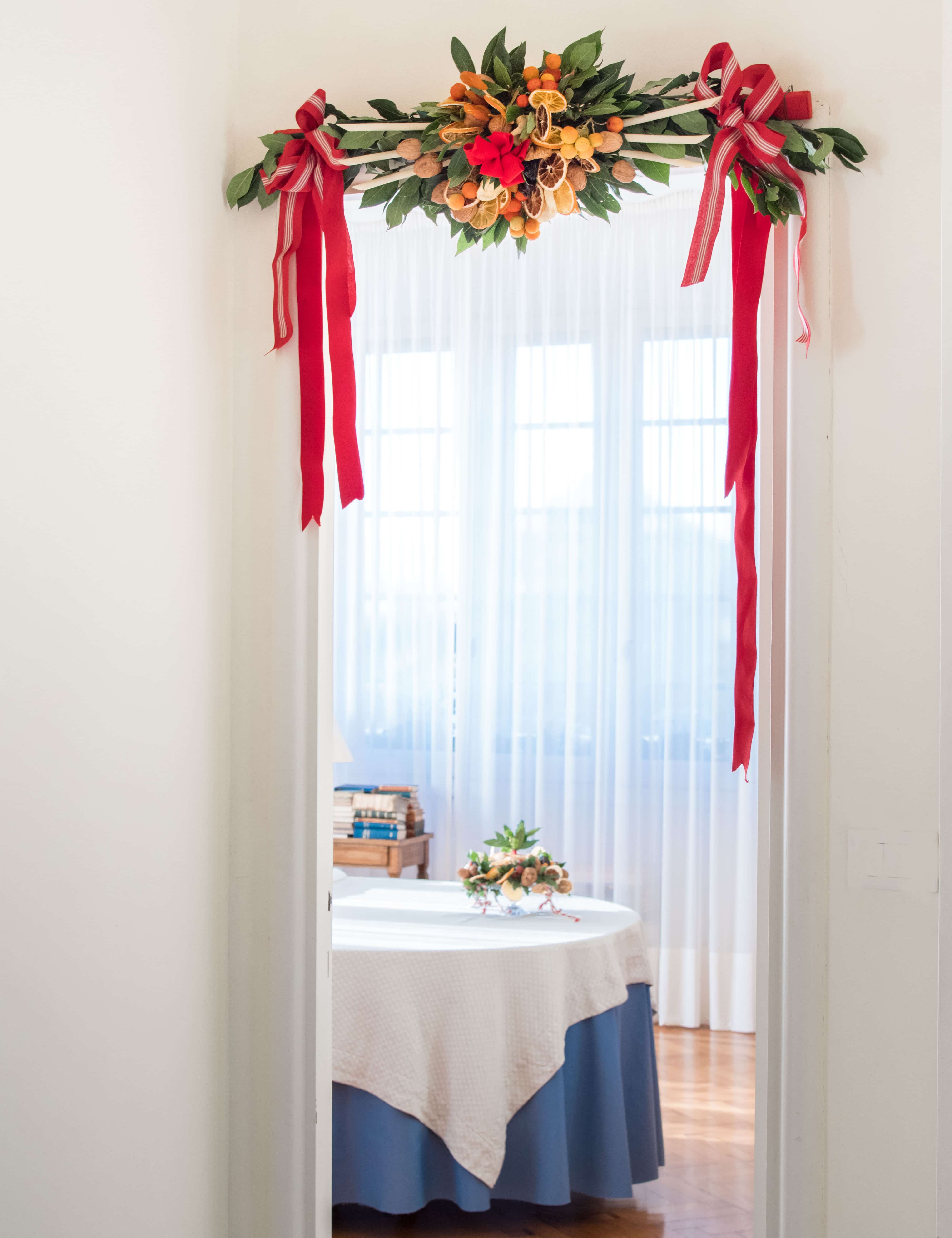 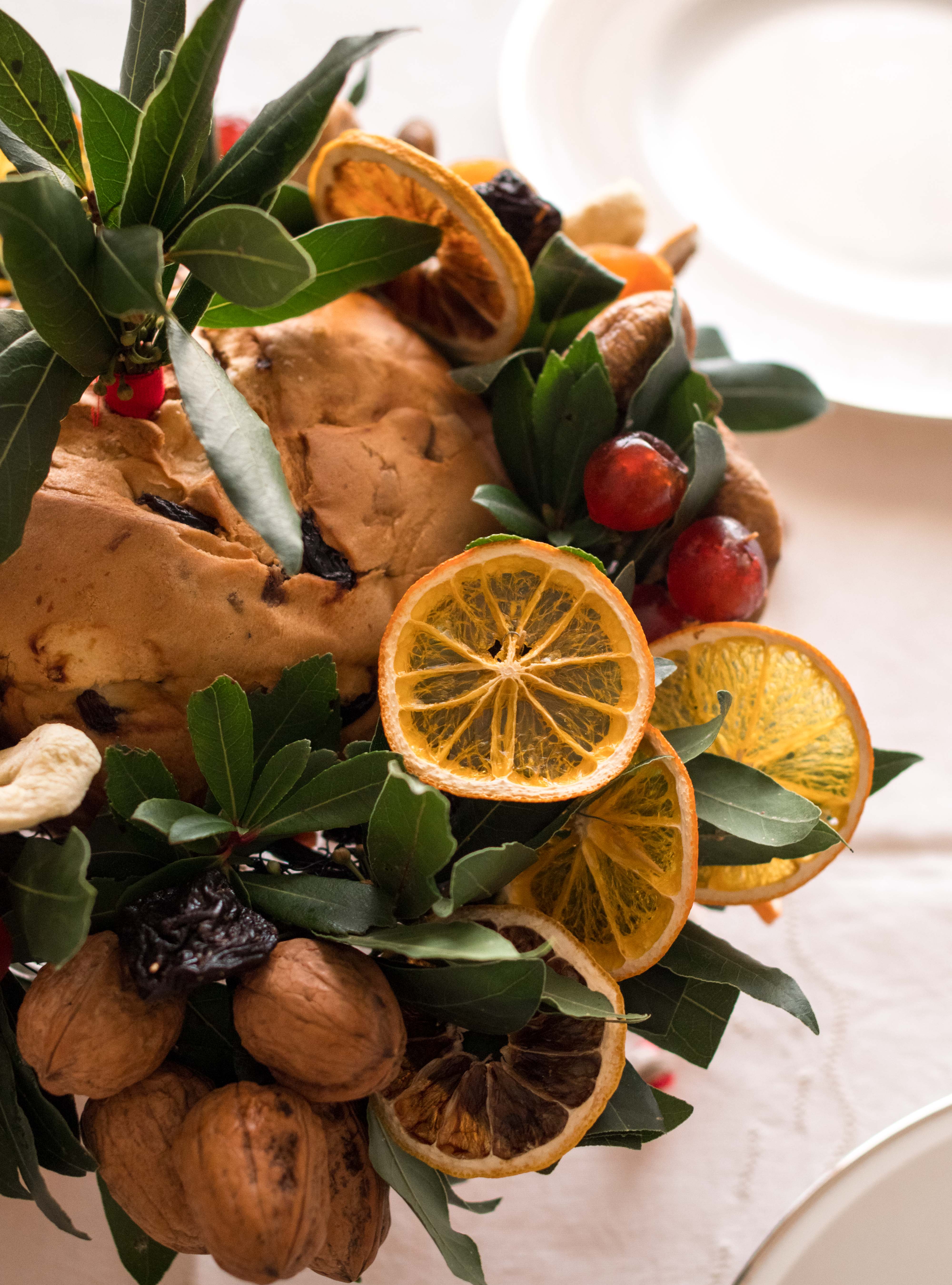 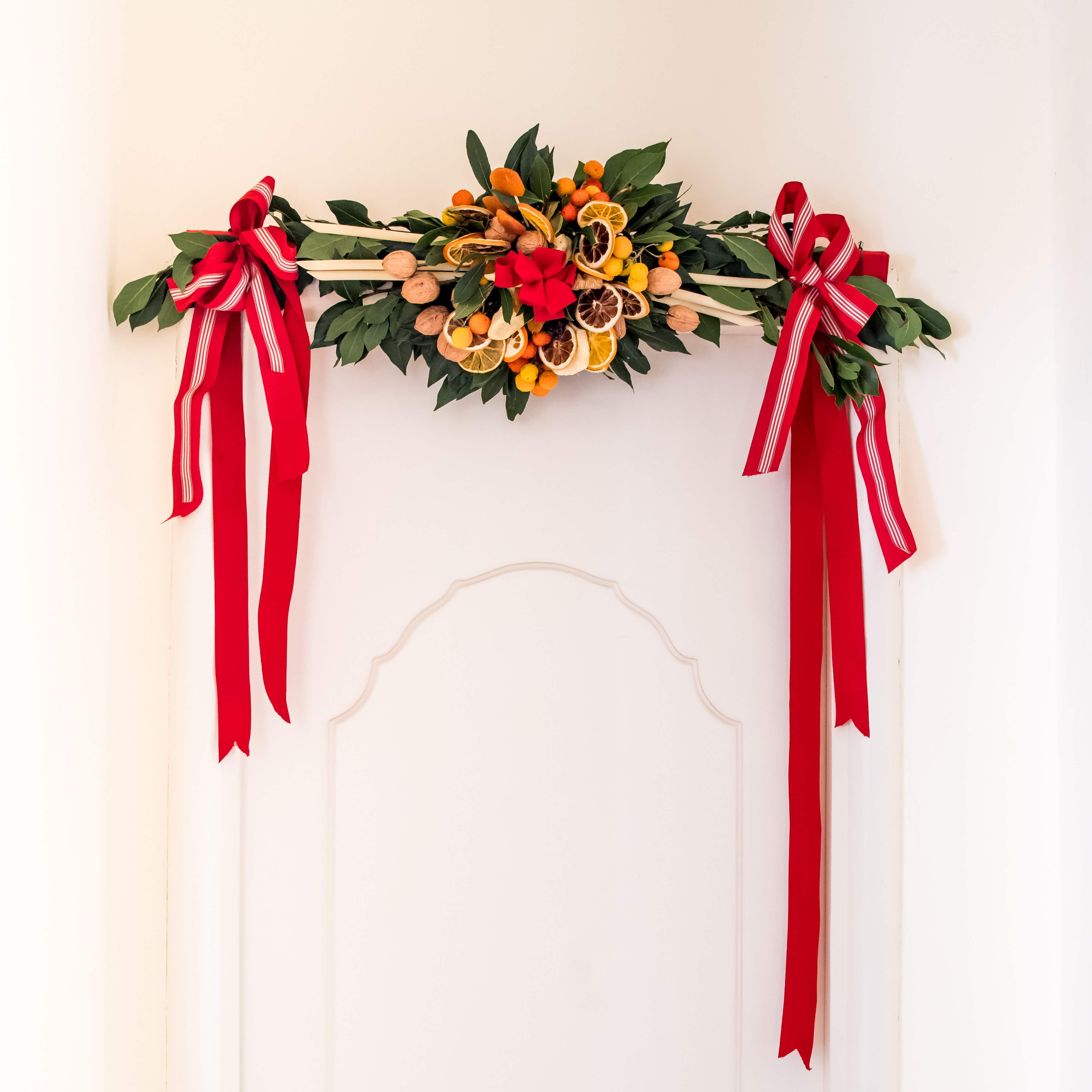 […] And for better understanding Genoese traditions and how we used to decorate our table and home for Christmas, here my post on Genoa Christmas traditions and two floral video tutorials. […]