We are in the middle of summer and I cannot fail to tell you about one of the salads that best represents this season in Liguria: the tomato cundigiun (or condigiun or condiglione)

It is a dish of popular cuisine, home-made, for every day and difficult to codify. If you find a written recipe you have to take it only as an hypothesis, no more authoritative than those handed down for generations from mother to daughter. This is probably why traditional restaurants hardly offer condigiun: it remains an intimate, familiar, easily debatable recipe. However, this does not mean that you cannot rediscover it, tell  it and make it your own.

Cundigiun apparently finds its origins in Western Liguria on the border with Provence. In that it partially recalls the famous French niçoise. Over time it walked along the entire Ligurian arc, gradually changing, as always happens, according to the areas, the family tastes, the seasons, arriving on the Genoese tables.

The Cundigiun tells the story of the Ligurian peasants, or rather of the Ligurian women, who, while waiting for their  husbands embarked on some fishing boats, consumed it on the street, gathered all around a single plate (u “grillettu”), among a gossip and the other.

It is a salad where the protagonists are the summer vegetables that grow in the narrow terraced vegetable gardens of this region: tomatoes, peppers, cucumbers, red onions, green beans and, sometimes, potatoes.

The best tomatoes are those you see here below, the local variety called “cuori di bue” (beaf heart) farmed in the Albenga plain, very pulpy and juicy.

A salad enriched by the scent of the abundant basil leaves broken roughly with the hands, by the intense taste of the Taggiasca olives and by the savory and full-bodied presence of salted anchovies, a precious protein food that was never lacking in the larders of the Ligurian peasants.

Finally, a dish that wants to be seasoned with plenty of extra virgin olive oil, as suggested by the local proverb that reads:

“I don’t trust three things: condiglione without seasoning, beautiful flirtatious woman and peasant without a trident.”

A very common variation of Cundigiun involves the addition of the traditional sailors’ crackers – a dry bread that was once consumed on board vessels – perhaps to give more substance to the salad, transforming it into a complete and balanced single dish. The crackers are always slightly softened with water and vinegar and then placed at the bottom of the serving plate to collect, soaking, the juice of the tomatoes and of the other vegetables. This is the version I prefer.

If you don’t have the seafarers’ crackers you can use some toasted bruschetta bread cut in cubes. The salad will recall a southern panzanella.

Finally if you have time to wait a few hours before eating it, the wait will be amply repaid!

The recipe you find here is mine, the one I prepare for lunch on hot days and which I offer to my guests during cooking classes. There are no green beans and eggs, because I prepare it quickly without putting anything on the fire to boil. If you want to enrich it, however, add them as well! 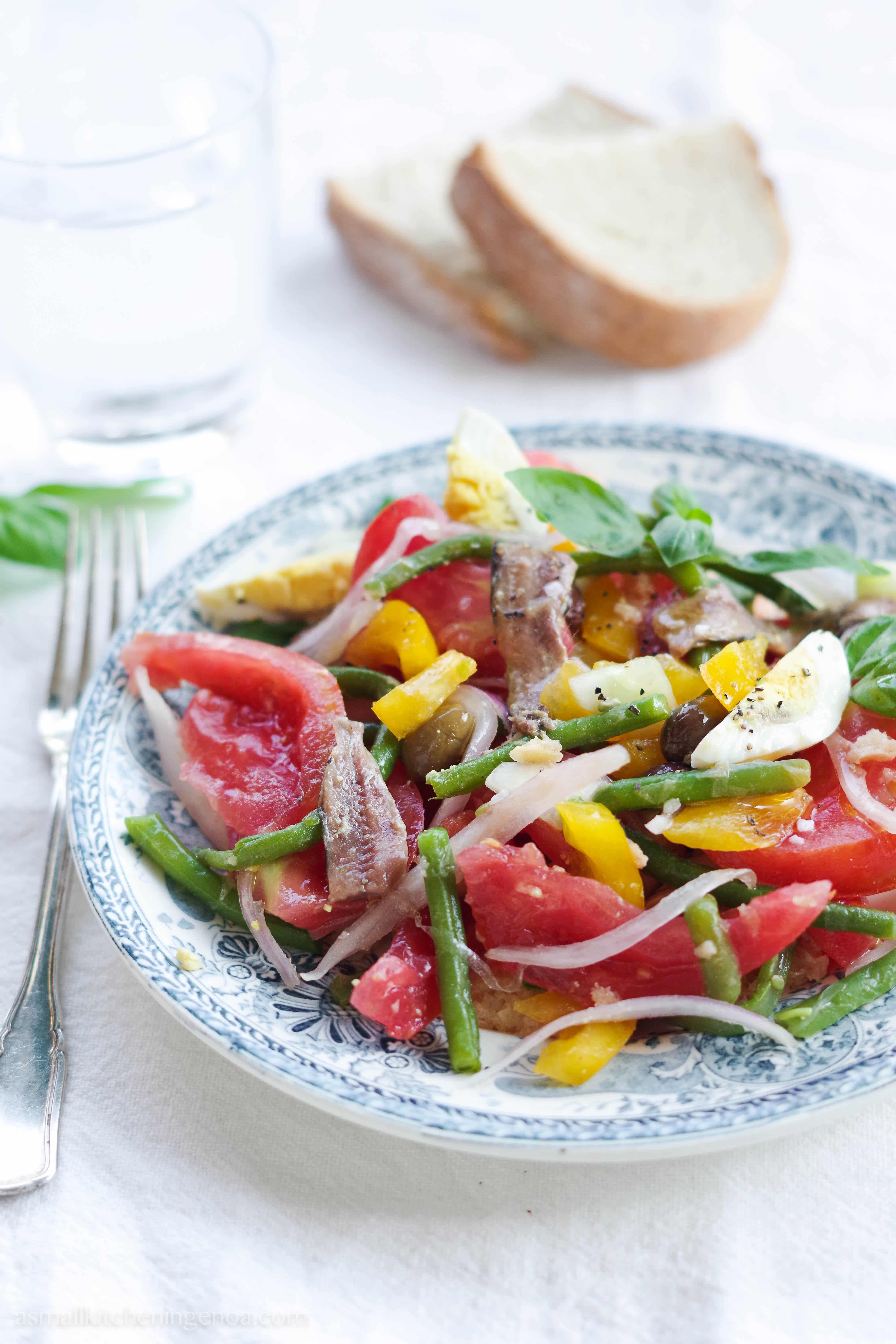 Love this lite summer salad. In the U,S,A a similar salad is served with barbecues. Thank you for your version.,

[…] is the tomato salad called Condigiun, which I told you a few summers ago, the other is Capponada (or Capponadda), the one I’m talking […]